Iranâ€™s defence minister has confirmed a US claim that two Iranian fighter jets fired on an unarmed US Predator drone in the Gulf last week. 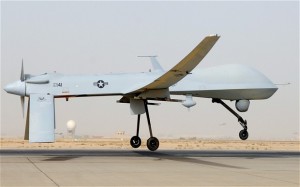 â€œLast week an anonymous plane entered the space over the territorial waters of the Islamic Republic of Iran in the Persian Gulf area which, due to the timely, clever and decisive action of our armed forces, was forced to flee,â€ Ahmad Vahidi was quoted on ISNA as saying on Friday.

â€œThis instance and others before show that the Islamic Republic of Iran has the needed vigilance to monitor all movements and takes decisive and timely actions.â€

His comments came after the deputy chief of Iranâ€™s armed forces, Brigadier General Masoud Jazayeri, had implied the aerial shooting had taken place, in a quote posted earlier on Friday by the the Revolutionary Guardsâ€™ website.

Pentagon spokesman George Little said on Tuesday the Iranian Su-25 Frogfoot fighters fired at the drone on November 1 but did not hit it.

It was unclear whether the Iranians intended to warn off the unmanned drone but Mr Little said: â€œOur working assumption is that they fired to take it down.â€

The drone was â€œnever in Iranian airspaceâ€ and came under fire off the Iranian coast over international waters, Mr Little said.

In a warning to Tehran, Mr Little said the United States was prepared to safeguard its forces.

The confrontation threatened to derail diplomatic efforts to defuse a mounting crisis over Tehranâ€™s nuclear programme, amid a shadow war of cyber attacks, bombings and assassinations.