<![CDATA[Iran will unveil a domestically manufactured missile-launching warship in the coming days, the countryâ€™s navy chief said. It comes days after Tehran accused the US Navy of conducting â€œillegal and provocative actsâ€ in the Persian Gulf. <!--RTEditor:genereated-->“One of the new achievements of the Navy of the Islamic RepublicÂ  of Iran is the Sinai 7 missile-launching warshipâ€¦ which will be unveiled on Wednesday,” Navy Commander Rear Admiral Habibollah Sayyari was quoted as saying by Press TV. 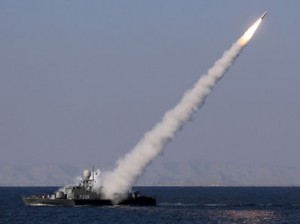 Two new Ghadir-class submarines will also become operational by November 27. Subs of this type are made primarily for shallow-depth performance and can conduct extended coastal missions. The Islamic Republic will hold a major naval drill, dubbed Velayat 91, between December 21 of 2012 and January 20 of 2013 in the countryâ€™s southeastern waters. Last December, Iran conducted naval drills in an area stretching from the east of the Strait of Hormuz in the Persian Gulf to the Gulf of Aden. Sayyari also said that the navy had plans to send a fleet of warships to the Mediterranean Sea and the Atlantic Ocean. The Iranian Navy is considered to be the most powerful and efficient in the Persian Gulf, having at its disposal five corvettes, 20 missile and 20 torpedo boats, 13 amphibious ships, 28 auxiliary ships, three submarines, 22 aircraft and 15 helicopters. Recently Iran unveiled its new, fifth navy base in the Strait of Hormuz, located near a major oil transit corridor, through which one fifth of the worldâ€™s oil passes from the Persian Gulf to the IndianÂ  Ocean. The Strait has recently become the focus of tensions, with Tehran threatening to block the route in retaliation for international sanctions over its alleged nuclear weapons program. The US has pledged to keep the strategic oil lane open. Iran is constantly upgrading its military capabilities. In recent years, Iran declared it had made great achievements in the defense sector and attained self-sufficiency in essential military equipment and systems. The country produces its own tanks, self-propelled guns and multiple rocket launchers. One of its latest achievements is Jamaran, its first domestically-built destroyer, which was launched in the Persian Gulf in February 2010. Iran is also actively engaged in missile development. Its Shahab-3 long-range ballistic rocket has range of 5,000 kilometers â€“ meaning it could reach Israel and all US military bases in the Persian Gulf. Tensions have been simmering in the region for several months, with Israel declaring that it is ready to strike Iran in order to prevent it from building an atomic weapon. Recently Israel said a decision over a military strike on Iran will have to be made in â€œeight to ten months.â€ Washington has also said no options are off the table in regards to Iran, though it indicated that it would not support a unilateral Israeli attack on the country. In the latest chapter of the standoff on Saturday, Iran accused the US Navy of â€œillegal and provocative actsâ€ near its coastline, including violations of its airspace. Iranâ€™s Envoy to the United Nations Mohammad Khazaee filed formal accusations of these charges with both UN Secretary-General Ban Ki-moon and the UN Security Council. Israeli intelligence believe that Iran is accelerating the development of nuclear weapons, though experts around the world, including in the US, dispute the claim. Iran has repeatedly assured other nations, especially its neighbors, that its nuclear program is for strictly civil purposes. (RT News).]]>