Iranian officials say they aren’t scared of Israelâ€™s threats of a military assault aimed at their rumored nuclear warhead program, but a senior officer in Iran’s Revolutionary Guard says such a strike would warrant retaliation against US bases. 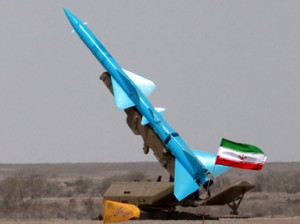 Should Israel make good with its warning of using military force to take down an Iranian nuke procurement plan, Gen. Amir Ali Hajizadeh of Iranâ€™s Revolutionary Guard says that the response will be costly for the United States military, even if America does not endorse a unilateral strike on Iran.

Gen. Hajizadeh explains in a statement this week that Americaâ€™s continuing support of Israel is enough to associate them with any attack waged against Iran, even if the US has officially condemned any plans to put boots in the ground to dismantle the rumored nuclear program.

“For this reason, we will enter a confrontation with both parties and will definitely be at war with American bases should a war break out,” Hajizadeh says, according to a post on Iran’s state Al-Alam TV.

Hajizadeh adds that among the US facilities that would be targeted are structures in Bahrain, Qatar and Afghanistan.

“There will be no neutral country in the region,” Hajizadeh says. “To us, these bases are equal to US soil.”

Israeli officials continue to make a case that Iran is working towards obtaining a nuclear warhead and have repeatedly pleaded with the United States to intervene, but Iranian authorities insist that any research being done is for peaceful purposes.

Earlier this month, Israeli Prime Minister Benjamin Netanyahu said, “Those in the international community who refuse to put red lines before Iran don’t have a moral right to place a red light before Israel,â€ and once more pressured US President Barack Obama to announce Americaâ€™s cooperation in an attack against Iran.

Although President Obama refused to intervene at this time, over the weekend he told CBSâ€™ 60 Minutes news program that he understands Israelâ€™s plea but must put the national security of the US first above their allyâ€™s request.

â€œWhen it comes to our national security decisions â€” any pressure that I feel is simply to do whatâ€™s right for the American people. And I am going to block outâ€”any noise thatâ€™s out there. Now I feel an obligation, not pressure but obligation, to make sure that weâ€™re in close consultation with the Israelis â€” on these issues. Because it affects them deeply. Theyâ€™re one of our closest allies in the region. And weâ€™ve got an Iranian regime that has said horrible things that directly threaten Israelâ€™s existence,â€ the president told 60 Minutes.

On Monday, Iranian President Mahmoud Ahmadinejad commented on the conflict from the United Nations headquarters in New York City, refusing to call Israel by name and rejecting their warnings.

“Fundamentally we do not take seriously the threats of the Zionists. â€¦ We have all the defensive means at our disposal and we are ready to defend ourselves,” Ahmadinejad said.

“We don’t even count them as any part of any equation for Iran. During a historical phase, they represent minimal disturbances that come into the picture and are then eliminated,” the president added.

President Ahmadinejad had arrived in New York to participate in the UN General Assemblyâ€™s annual discussion for the last time as president, as Iranian rules forbid him from running for another term. He is not scheduled to deliver a speech until Wednesday, but ahead of that address he said he remains open for discussions with the United States.

“The nuclear issue is not a problem. But the approach of the United States on Iran is important. We are ready for dialogue, for a fundamental resolution of the problems, but under conditions that are based on fairness and mutual respect,â€ Ahmadinejad said.

“We are not expecting a 33-year-old problem between the United States and Iran to be resolved in a speedy fashion. But there is no other way besides dialogue.â€ (RT News)