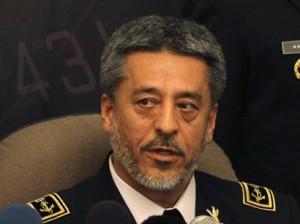 The US and itâ€™s allies have been concerned about Iran and its deployment of ships in international waters.

Commander of the Iranian Navy Habibollah Sayyari said that Iran has a right to use international waters like any other country.

â€œWe are present on the free waters of the world and we anchored on many ports which we have coordinated before, including Sudan, Jeddah, Djibouti, Sri Lanka and Latakia,â€ the Trend News Agency in Iran quoted him as saying.

Admiral Sayyari has told reporters that the the navy is capable of protecting itâ€™s nationâ€™s resources, interests and borders and is capable of confronting the enemy anywhere.

Last month Iran said it will deploy a fleet of warships to patrol the north of the Indian Ocean, the Gulf of Aden, Bab-el-Mandeb, the Red Sea, Suez Canal and the Mediterranean Sea for three months and will even sail as far as southeastern Asian countries.