Tehran plans to deploy “light submarines” to the Caspian Sea, Iranian Navy top brass has told Fars news agency. The Persian country appears to be gearing up its forces in the oil-rich waters, where shelf boundaries still remain somewhat vague.

­Adm. Abbas Zamini says Iran is to dispatch light submarines to the Caspian Sea, reads the Saturday report by the semi-official Fars news agency. Zamini did not elaborate on how many subs would be deployed or what the nature of their missions would be. 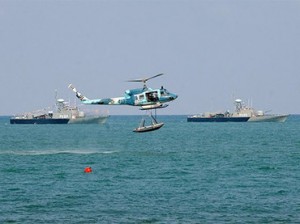 After Moscow, Tehran is the second power in the sea that adjoins Iran, Russia, Kazakhstan, Turkmenistan and Azerbaijan. Iran’s Caspian force is estimated to be around 100 missile boats, two of which are equipped with anti-ship missiles. Tehran has also earlier announced it is building a destroyer, which will become the largest ship in its Caspian fleet.

The collapse of the Soviet Union brought new players to the area rich with oil and natural gas fields, while shelf boundaries are yet to be defined.

Emerging as sovereign nations 20 years ago, Azerbaijan, Kazakhstan, and Turkmenistan have been building their Caspian fleets from scratch to protect their newly-found riches. Russia and Iran, on the other hand, have been strengthening the navies they already have. The Foreign Policy journal defined the events unfolding at the sea as “an arms race.”

The reasons for the race, as outlined by FP, are mistrust of Iran, fear of Russia’s naval dominance on the one side – and Moscow’s and Tehran’s worries of possible US and European involvement in the Caspian.

Turkmenistan’s hopes for a “Trans-Caspian Pipeline” project, which would allow transporting natural gas through Azerbaijan via the sea bottom and onward to Europe, do not help to relieve tensions in the region. Iran and Russia both oppose the plan.

The oil in the Caspian basin is estimated to be worth around $11-12 trillion. Of the five nations, Iran boasts the largest total oil reserves, while Azerbaijan and Kazakhstan shores have the largest reserves of explored oil. (RT News)