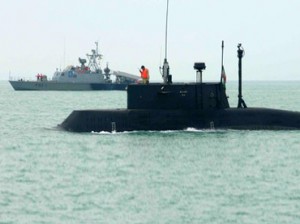 Rear Admiral Sayyari said the fleet of Iranian warships is moving towards Southeast Asia to pass through the Strait of Malacca.

The Strait of Malacca is a narrow, 805 km stretch of water between the Malay Peninsula and the Indonesian island of Sumatra.

The Navy commander told the Islamic Republic news agency that Iranian warships have already started their voyage to the East of the Indian Ocean, and will likely dock in Sri Lanka, India or China.

â€œThis fleet of warship will definitely traverse through the Strait of Malacca in the very Eastern point of the Indian Ocean and will then return to Iran,â€ Sayyari noted.

Meantime, the commander rejected the speculations about joint military exercises with China, stressing that such drills are not on the agenda of the Iranian Navy.

In December 2012, Sayyari had said that the Iranian Navy has been able to successfully expand its operational zone to the Northern waters of the Indian Ocean and is now operating in a vast area.

â€œStretching the Navyâ€™s operational range from a small limited zone to the northern waters of the Indian Ocean and an area of 2,000,100 square kilometers was another golden page in the history of the Navyâ€™s glories,â€ he said at the time.

He added that the Navyâ€™s ability to expand its presence in the sea is vital for Iranâ€™s progress.