Pakistani spy agency Inter-Service Intelligence [ISI] is believed to be mastermind behind pre-planned attack on the Buddhist monasteries in Bangladesh. Extremist Muslims and some unidentified people, who are believed to be Rohingyas from the neighboring Myanmar vandalised and set on fire Buddhist monasteries on September 30, 2012 on hearing of a Facebook post desecrating the Qur’an, which was tagged on the wall of a Buddhist youth by someone else. Within 24 hours of this notoriety, a fresh spate of sectarian violence, two more Buddhist monasteries were burnt down in the same locality. In Patiya of Chittagong, more than 500 workers of Western Marine set on fire two Buddhist temples, Kalagaon Ratnankur Bouddha Bihar and Lakhera Abhoy Bouddha Bihar, and a Hindu temple, Kalagaon Nabarun Sangha Durgabari after midnight past September 30. The total number of damaged temples in Cox’s Bazar and Chittagong now stands at 22.

According to information, agents and operatives of ISI became extremely active for past few months within the Chittagong Hill Tract areas under the garb of non governmental organizations. They have been giving provocations to the Muslim population in that area of “conspiracy of vested quarters” of evicting them [Bangla speaking people] from Chittagong Hill Tract areas with the help of the ruling party. They were even instigated of waging secret war against the religious minority groups in the locality, compelling them to migrate to India or Myanmar.

Pakistani intelligence agency has been working under various disguise inside Bangladesh. Since March this year, ISI operatives in the country are ex-armed cadres of now defunct Freedom Party. It may be mentioned here that, Freedom Party was formed by the self-proclaimed killers of Bangabandhu Sheikh Mujibur Rahman following his brutal assassination in 1975. Founders of this so-called political party received millions of dollars from Libya’s former dictator Muammar Al Gaddafi. Freedom Party was recruiting armed cadres from across Bangladesh with the ulterior motive of staging another bloody coup in the country. The armed gangs of Freedom Party made several assassination attempts on Sheikh Hasina and members of her family. But, since few of the kingpins of Freedom Party were hanged to death in 2011, most of its armed cadres went either into hiding or joined local crime rackets. The armed cadres of the party had been given guerrilla warfare training in Libya and Palestine which was financed by Gaddafi and the Pakistani spy agency.

During the tenure of Bangladesh Nationalist Party [BNP] led coalition government [2001-2006], ISI were actively funding anti Ahmadiya activities in Bangladesh, which were also silently witnessed by the ruling party. The anti-Ahmadiya groups continued to attack and demolish mosques of the Ahmadiya Muslim Jamaat as well continue numerous forms of atrocities on this religious minority group in Bangladesh. It may be mentioned here that, under Pakistani law, Ahmadiyas are not considered as Muslims, while Bangladesh has never ceased the rights of Ahmadiyas to be considered as Muslims. 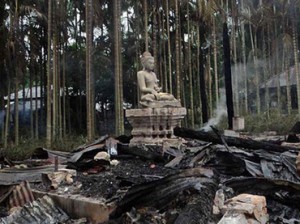 It is even rumored that the August 21, 2004 grenade attack of Bangladesh Awami League leader Sheikh Hasina was originally plotted by the Pakistani spy agency, which later was implemented by some of the influential figures in the BNP led coalitions government. In some of secret meetings to finalize the August 21 attack, station chief of ISI in Bangladesh or some deep-covered officials were present.

When Bangladesh Awami League led coalition government came in power in 2009, activities of Inter-Service Intelligence got significantly tamed as the government was committed working in combating Islamist militancy and religious extremism.

ISI activities inside Bangladesh were significantly increased in the recent months with the ulterior motive of putting the ruling party into huge crisis both domestically and internationally. Its operations in Bangladesh are divided into several segments namely propaganda, information gathering, recruitment, guerrilla training and offensives. Its propaganda plans are implemented by some of the big fishes in a vernacular daily while a self-proclaimed ex operative of Bangladesh’s intelligence, who now works for the Pakistani spy agency is coordinating media war against the ruling government in Bangladesh.

It may be mentioned here that, since independence of Bangladesh, this is for the first time; the peace-loving Buddhist population in the country has become victim of such nefarious brutality and barbaric acts.

Pakistani ISI has been actively involved in illegal trafficking of drugs, arms and counterfeit Indian currency into various destinations in India by using Bangladeshi territory as transit. It is confirmed by dependable sources that, currently ISI is operating at least 50 business establishments inside Bangladesh.

Giving strong reaction at the recent atrocities on the Buddhist and Hindu populations in Chittagong Hill Tract, advocate Gobinda Chandra Pramanik, secretary general of Bangladesh Jatio Hindu Mohajote [Bangladesh National Hindu Grand Alliance] said, “the government needs to give exemplary punishment to the perpetrators and their masterminds. This is the most unfortunate situation for the religious minorities in the country.”

He said, “We strongly condemn such barbaric actions and equally demand stern action against the members of the law enforcing agencies, who silently witnesses such massacre on the monasteries and temples.”

Gobinda Chandra Pramanik said, “We believe there is some hands of foreign elements behind such notoriety and the government should properly investigate and identify the culprits for the sake of image of the country.”

Commenting on such heinous crime, leading English language newspaper The Daily Star in editorial comment said, “What happened in Ramu and some other areas in Chittagong must be condemned in the strongest possible terms. The outrage that was created by people burning down Buddhist temples and houses belies the long tradition of harmonious and peaceful coexistence between people of various creeds in Bangladesh. Religious tolerance and peaceful coexistence are not only an article of our people it is also enshrined in the Constitution of Bangladesh.

“The regrettable incident has struck at the very ethos and the underlying essence of our long religio-cultural tradition. Whatever may have been the causative factor, the violent reaction seems to have been very well orchestrated. We believe that those who believe in the fundamental message of Islam would have exercised more temperance in addressing an issue centering on an anti-Islam picture on Facebook.”

Some of the eminent columnists in Bangladesh are already predicting ‘monster’ behind such notoriety on the Buddhist and Hindu temples in the Chittagong Hill Tract areas.

Columnist Syed Mansur Hashim wrote: “The outrage that some unidentified trouble-mongers committed against Buddhist communities at Teknaf, Ramu and Ukhia upazilas on the nights of Saturday and Sunday has shocked the entire nation. Clearly, the perpetrators have tried to besmear Bangladesh’s image as a nation of religious tolerance and harmony. The way Buddhist temples have been damaged and desecrated and houses of Budhist villagers have been ransacked and set ablaze speaks volumes for the monsters behind the mayhem.”

He wrote, “The mob violence that engulfed Buddhist villages saw widespread looting and the gutting of religious relics and monasteries. With some of the most revered Buddhist temples in ashes, including the 250-year-old Shima Bihar in Ramu, communal harmony between Buddhists and Muslims is effectively in tatters. The attacks were an attack on harmony and on peaceful coexistence. But given recent events, particularly the worldwide backlash of Muslims against a film made in California mocking the Prophet Mohammad, religious sentiments had already been heightened and subversive elements have taken advantage of the situation to incite communal violence.”

English language daily The New Age in its editorial comment wrote, “While it is absolutely unacceptable in a democratic political and cultural dispensation to have the minority communities, religious or ethnic or otherwise, assailed by the majority ones, a section of the majority Muslim community resorted to rampant attacks on Buddhist monasteries, Hindu temples and households in Ramu of Cox’s Bazar on Saturday midnight and Sunday.” (www.weeklyblitz.net)