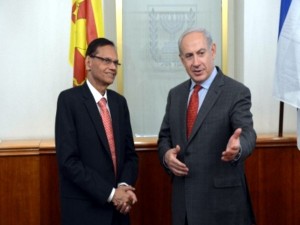 It said that Prime Minister Benjamin Netanyahu told the visiting Sri Lankan Minister that the visit is an opportunity to strengthen the relationship between Sri Lanka and Israel.

He later said Israel faces great challenges of security and peace, with peace being peace with the Palestinians.

Sri Lanka is a close ally of Iran and also opposes any military operation by Israel which targets Palestine.