The Israeli military has fired a missile into Syria, the first time Israel has been drawn into the fighting in the neighbouring country.

The military said it had fired the missile as a warning shot on Sunday after a stray mortar round from Syria hit a military post in the Golan Heights. Israel captured the Golan from Syria in the 1967 Middle East war and subsequently annexed it. 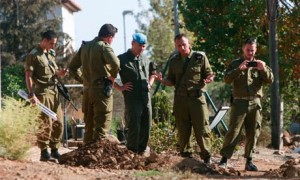 The military says no damage or injuries were reported inside Israel.

A string of mortar shells have struck the Golan Heights during the Syrian civil war. Israel views the fire as accidental, but nonetheless has warned that it holds Syria responsible.

“A short while ago, a mortar shell targeted an IDF [Israel Defence Forces] post in the Golan Heights,” said army spokeswoman Lieutenant-Colonel Avital Leibovich. “We answered with a warning shot towards Syrian areas. We understand this was a mistake and was not meant to target Israel and then that is why we fired a warning shot in retaliation.”

The Israeli military also said it had filed a complaint through United Nations forces operating in the area, stating that “fire emanating from Syria into Israel will not be tolerated and shall be responded to with severity”.

Israel and Syria are bitter foes who have fought several wars, but their shared border has been mostly quiet since a 1974 ceasefire. Still, Israel worries that Syria’s civil war could spill across into the Golan Heights, and repeated errant fire has intensified that concern.

Israel fears that if the regime of the Syrian president, Bashar al-Assad, is toppled, the country could fall into the hands of Islamist extremists or descend into sectarian warfare, destabilising the region.

Israeli officials do not see Assad trying to intentionally draw Israel into the fighting, but have raised the possibility of his targeting Israel in an act of desperation. They also fear that Syria’s stockpile of chemical weapons or other weapons could slip into the hands of Lebanon’s militant Hezbollah group, a close Syrian ally, or reach other militants if Assad loses power.

Israeli officials also worry that the frontier region could turn into a lawless area like Egypt’s Sinai desert, which Islamist militants now use as a launching ground for strikes against southern Israel.

Speaking to his cabinet on Sunday, the Israeli prime minister, Binyamin Netanyahu, said Israel was “closely monitoring” the border with Syria and was “ready for any development”. (The Guardian).