The Israeli air force has shot down a drone after it entered the south of the country, the military has confirmed. 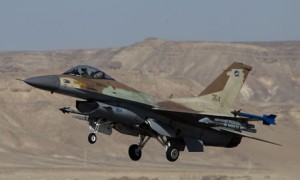 Troops are searching for the remains of the unmanned aircraft after it was intercepted and brought down over the Negev desert on Saturday morning.

It was not clear where it came from although local reports suggested that it did not depart from the Gaza Strip.

The drone was spotted above the Mediterranean Sea in the area of the Hamas-ruled Gaza Strip to the west of Israel, said a military spokeswoman, Avital Leibovich.

It was escorted by air force jets once it crossed into Israeli air space and travelled around 35 miles east across Israel’s southern Negev desert before being shot down.

The Israel Defence Forces said their soldiers were examining the aircraft’s flight path and were searching the area to locate debris and identify its origin.

Local media reported that it appeared to be an intelligence gathering drone and was not carrying explosives.

An IDF spokesman, Brigadier General Yoav Mordechai, described the interception as a full operational success and said the aircraft had been downed in accordance with a decision by the force’s top leaders.

In a statement, Israel’s defence minister, Ehud Barak, congratulated the military, saying: “We view this incident of attempting to enter Israeli airspace very severely and we will consider our response later.” (The Guardian)