<![CDATA[The vehicle of Jaffna TNA MP E. Saravanabavan was attacked by a group when the MP was at the entrance of the Jaffna university today to inquire into a tense situation involving the students and the army. <a href="http://www.eelamenews.com/?attachment_id=106443" rel="attachment wp-att-106443"> 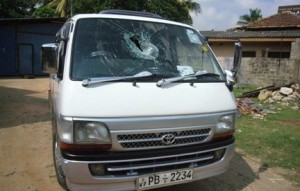 Speaking to reporters in Jaffna this afternoon, the MP said that a group had attacked his vehicle while he was having a heated argument with the army and police who had refused to allow him to enter the university premises. A tense situation developed at the university last evening when the students attempted to commemorate the LTTE ‘heroes day” anniversary. The army and police had prevented the students from going ahead with the event and this morning at least 5 students were arrested as they staged a demonstration over the incident. The Uthayan newspaper website quoted the TNA MP as saying his van was attacked when he went to the university today to inquire over the incident despite the strong army and police presence in the area. He said that he had lodged a complaint over the incident with the police and will raise the issue in parliament as well.]]>