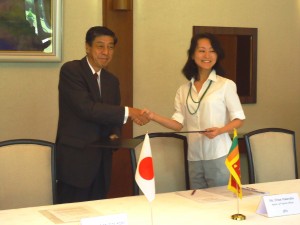 he Government of Japan has extended US$723,568 (approximately Rs. 90 million) to the â€œProject on Livelihood Assistance for Returnees in the North and East of Sri Lankaâ€ to be implemented by JEN, a Japanese NGO, in order to improve the livelihood of the resettled communities in the North and East under the Japan-NGO cooperation Grant scheme funded by the Government of Japan.

The project titled â€œProject on Livelihood Assistance for Returnees in the North and East of Sri Lankaâ€ will support to rehabilitate and uplift livelihood of the people through constructing agro-wells and providing necessary tools such as water pumps, and seeds and plants as well as workshops. It is envisaged that the project would facilitate stable water supply, ensure livelihood and food security, and improve income of nearly 350 families directly and indirectly.

As a nation which commits itself and also contributes to global peace and prosperity, Japan focuses its assistance in Sri Lanka on consolidation of peace and reconstruction as well as medium and long-term vision for development, the Japanese Embassy in Colombo said.

In this context, Japan has given high priority to support the reconstruction of the Northern and the Eastern provinces and to improving the living conditions of the people. Japan also extended its fullest support towards the peace process since it firmly believes that peace and reconciliation are pre-requisites for sustainable development and prosperity of Sri Lanka.

â€œJEN is an international NGO established in 1994 to provide victims of conflicts and natural disasters with emergency assistance and support for self-reliance across the globe. In Sri Lanka, JEN started its operations in the aftermath of the Tsunami in 2004. Soon after completing the operation, JEN has focused on assisting the people affected by the conflict in the East since 2007 and in the North since 2009,â€ Ms. Watanabe, Administration and Finance Officer of Colombo Office of JEN, said.

From 1st February 2013, JEN starts a new 1-year project â€œProject on Livelihood Assistance for Returnees in the North and East of Sri Lankaâ€.