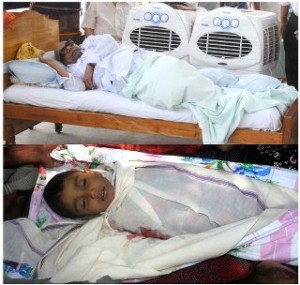 Lashing out at her arch rival and DMK president M Karunanidhi for moving the Indian Supreme Court seeking retrieval of Katchatheevu island from Sri Lanka, Tamil Nadu Chief Minister J Jayalalithaa today termed it as a â€œpolitical opportunistic dramaâ€ to hood wink people of the state.

She accused Karunanidhi of doing little to prevent ceding of the island through a pact in 1974 by the then Prime Minister Indira Gandhi and slammed him for betraying fishermen from the state, who have been suffering at the hands of the Sri Lankan authorities while fishing, the Indian Express reported.

â€œHe seems to have taken this decision for political mileage fearing I would succeed in this case like getting the final award of the Cauvery Tribunal notified in a Central gazetteâ€, She said apparently pointing to her legal and political battle seeking annulling of the 1974 accord on Katchatheevu. Jayalalithaa took a dig at DMK patriarch for seeking the help of Congress to ensure her daughter Kanimozhiâ€™s victory in the recent Rajya Sabha election and dubbed it as â€œheight of his selfishnessâ€.

â€œKarunanidhi did not take any step to stop ceding of the islet. He could have moved the court then citing the Berubari judgement by which the Supreme Court ruled against ceding of the area to east Pakistan. This was the first betrayal by Karunanidhi to fishermen of the stateâ€, she alleged in a strongly worded statement here. Jayalalithaa accused that Karunanidhi committed â€œsecond betrayalâ€ when his government failed to file a favourable response to her petition moved before the Supreme Court in 2008 seeking to declare the 1974 pact on Katchatheevu as illegal.

Slamming Karunanidhi, she accused him of â€œthird betrayalâ€ when he did nothing to pressurise the Centre to file a favourable response when the Union Government argued praying for dismissal of her petition. â€œThe time is not far off when the people of the state will teach him a lesson,â€ she said.