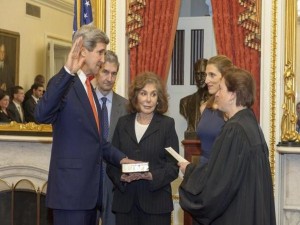 After 28 years of reviewing foreign policy in that same room and representing Massachusetts in the Senate, Kerry takes the reins as Americaâ€™s top diplomat from outgoing Secretary of State Hillary Clinton. The Bay State Democrat breezed through the Senate confirmation process this week, earning near-unanimous support for his appointment.

The one-time presidential hopefulâ€™s ascension to State Department chief came on the same day a suicide bomber struck the US Embassy in Ankara, Turkey, killing a Turkish security guard. The attack â€” just months after four Americans were killed during an assault on a US consulate in Benghazi, Libya â€” underscores the challenges Kerry will face at Foggy Bottom.

Outgoing Secretary of State Clinton acknowleged the violence during a 7-minute farewell speech Friday, ending a four-year stint during which she traveled nearly 1â€‰million miles and visited 112 countries. She added to employees crowded nearby that she expects them to â€œbe as focused and dedicated for Secretary Kerry as you have been for me.â€

â€œWe live in very complex and even dangerous times,â€ Clinton said. â€œI know that the world we are trying to help bring into being in the 21st century will have many difficult days, but I am more optimistic today than I was when I stood here four years ago.â€

Kerryâ€™s wife, Teresa Heinz Kerry, held the Bible on which the now-former senator took his oath of office around 4 p.m. Friday, officials said. Sworn in while standing next to a bust of Cordell Hull â€“ the longest-serving secretary of state â€“ Kerry was joined by his daughter, Dr. Vanessa Kerry, and brother, Cameron Kerry. After the ceremony, about 50 staffers presented him with the chair heâ€™d sat in on the Senate floor for 28 years.

Kerry delivered a 50-minute farewell speech in the upper chamber Wednesday, urging lawmakers to learn from Congressâ€™ long history of compromise. The 1976 Boston College Law School graduate ended his legislative career atop the Foreign Relations Committee and as the seventh most senior member of the Senate.

The State Department announced Wednesday that Kerry had chosen Kagan â€“ the first female dean of Harvard Law School â€“ to administer his oath of office. Kerry spoke on Kaganâ€™s behalf to the Senate Judiciary Committee for her 2010 confirmation hearings, highlighting their work together on a tobacco bill when she was a policy advisor in the Clinton White House.

â€œ[Kerry] was honored to introduce her to the Senate Judiciary Committee during her confirmation and is deeply grateful to the Justice for agreeing to swear him in,â€ a Kerry spokesman said in a statement, adding, â€œeven if she is a Harvard graduate.â€ (Boston.com)