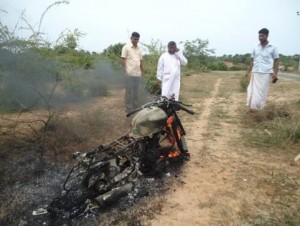 The Sri Lankan President Mahinda Rajapaksa is under fire from the U.N. Human Rights Council, which adopted a U.S.-sponsored resolution that calls on it to ensure government troops who committed war crimes during the final stages of its war against Tamil rebels are brought to justice.

At home, Rajapaksa bowed to international demands in May, releasing from jail his rival and former army chief Sarath Fonseka, who immediately vowed to fight for the government’s downfall.

MOODY’S: B1 with positive outlook

Following are the key political risks to watch:

Earlier this year the U.N. Human Rights Council adopted a resolution put forward by the United States urging Sri Lanka to implement the recommendations of an official Sri Lankan probe.

That commission called for the prosecution of soldiers guilty of misconduct.

The government said in July it would take up to five years to try those accused of atrocities, a step critics denounced as a bluff to reduce international scrutiny.

Tens of thousands of civilians were killed in 2009 in the final months of Sri Lanka’s 25-year civil war, a United Nations panel said last year, as government troops advanced on the ever-shrinking northern tip of the island controlled by Tamil forces fighting for an independent homeland.

Washington wants to force Colombo to address allegations of war crimes as part of wider ethno-political reconciliation to forestall renewed conflict, while Sri Lanka wants more time to pursue its own domestic process.

Adding to worries that the government is taking a heavy-handed approach to human rights, police shut down two anti-government news websites at the end of June, a move press groups said was intended to intimidate critics of President

Rajapaksa, and which drew statements of concern from the U.S. and EU.

A week after that, the government said it would tighten its media law to regulate all websites, not just printed material. A new line of confrontation may be opening with the judiciary, after a senior judge was beaten with pistols in early October, triggering a one day strike by judges, who were already angry at perceived political interference in the courts.

– How Sri Lanka responds to the U.N. resolution, and whether it comes under greater international pressure.

– Whether Sri Lanka fully implements the local commission’s report, and whether international pressure recedes when the government implements some of those recommendations.

– Tension between the judiciary and government, and if it rises further.

Though Sarath Fonseka is not an immediate political threat to Rajapaksa, the former general is still popular among many Sri Lankans for his outspoken criticism of the government.

The U.S. had long demanded Fonseka’s release, calling him a political prisoner, while rights groups have accused both Fonseka and the president in shooting surrendering Tamil Tiger rebels in the final stage of the war.

Fonseka is, however, capable of causing massive damage to Rajapaksa’s popularity, given that great numbers of Sri Lankans believe the former soldier could deliver in politics after helping to win the 25-year war.

A politically savvy Rajapaksa has only remitted his sentence, ensuring Fonseka is unable to stand in an election in the next seven years. Undeterred by that, Fonseka has started public campaigns to meet his supporters, and discuss Rajapaksa’s alleged policy lapses. He has openly called for a wider opposition alliance to topple the government.

– Fonseka’s moves against the Rajapaksa government. Whether opposition parties rally around Fonseka, or the bickering opposition fragments even more if Fonseka forms his own party.

In late September the central bank downwardly revised its projection for 2012 economic growth to 6.8 percent, a second reduction from its original 8 percent.

Treasury Secretary P.B. Jayasundera has predicted it will be a minimum 6.5 percent depending on the impact of a drought that has started in early 2012. Growth last year was a record 8.3 percent, but 6.4 percent in the second quarter of this year was

The government will cut spending from the 2012 budget to keep the fiscal deficit to a targeted 6.2 percent, Jayasundera has said. By April, Sri Lanka’s budget deficit was 285.8 billion rupees ($2.14 billion), almost 61 percent of the full-year goal of 468.9 billion rupees, raising concerns it may miss the target.

The International Monetary Fund in June lowered its growth forecast to 6.75 percent, down from an earlier estimate of 7.5 percent, due to tough policy measures the country has implemented since February.

The IMF fully disbursed a $2.6 billion IMF loan to Colombo in July, and the global lender is in preliminary discussion with the government about arranging a new credit.

Another key lender is Beijing. In August, the government said it would borrow more than $1.12 billion from China for a new port and railway construction.

The bank has raised key policy rates twice since February to more than two-year highs, and restricted banks’ lending, as it tries to keep down inflation and reduce its trade deficit.

At street level, higher costs of living have led to greater demands from trade unions, in the state sector and outside, for pay rises. The opposition, weakened by Rajapaksa’s two-thirds parliamentary majority, has some traction with the public on the issue.

In July, after selling a $1 billion, 10-year sovereign bond, the central bank said Sri Lanka would maintain a flexiblenexchange rate, allowing flows to determine trends, but the bank would intervene should fluctuations in the value of the rupee become too sharp. [ID: nL4E8IP37K]

The rupee has fallen 14 percent since Nov. 21 last year after the government devalued the currency by 3 percent, before allowing flexibility on Feb. 8. The currency fell 4 percent in the second quarter of 2012 alone.

Inflation accelerated to a 42-month high of 9.8 percent year-on-year in July. It eased to 9.1 percent in September as the government reduced some import taxes on essential foods.

– How quickly the government can address the cost of living issues.

– The scope of protests and whether opposition parties can find common ground to target the government.

– Whether the government maintains its hardline stance against protests.

Despite the tension with Washington, Sri Lanka has been given an extended waiver on imports of Iranian crude after it cut imports from Iran by up to 38 percent, switching to alternatives from Oman and Saudi Arabia.

However, it will have to abide by certain conditions including a further reducing imports during the six months to Dec. 31 if it wants the waiver to be extended.

Oil Minister Susil Premajayantha has said Sri Lanka, which is dependent on crude imports, took steps to reduce Iran crude purchases during the first six months of 2012 to eight cargoes per year from 13, buying four cargoes from Oman and one from Saudi Aramco.

He has also said the government will refurbish its only oil refinery to process oil from other origins.

Last year, Sri Lanka imported 93 percent of its crude from Iran, so if a waiver is not agreed it could suffer badly from sanctions on Iran.

– How Sri Lanka reduces Iranian imports further, and how it pays for imports from elsewhere.

– Deals with other nations for crude cargoes.(Reuters)