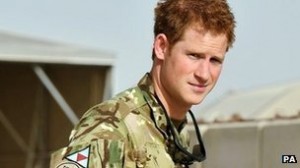 Harry said his mother Diana, Princess of Wales, would be “proud” of his work supporting an anti-landmine charity she championed.

Harry’s comments came at the end of the first day of his tour of the US where he received an ecstatic reception from ordinary Americans and first lady Michelle Obama.

He was greeted by screaming female admirers when he opened a photographic exhibition, on Washington’s Capitol Hill yesterday, promoting the work of the anti-landmine charity the Halo Trust.

And when he made a surprise visit to the White House to support military mothers, he received a standing ovation from guests and a glowing tribute from Mrs Obama.

The seven-day visit is the Prince’s first trip to America since he caused outrage by being photographed naked during a weekend break in Las Vegas last year.

Harry gave a speech in support of the Halo Trust at a British embassy reception attended by US policy-makers, supporters of the anti-landmine charity and potential donors,

The royal, who is patron of the trust’s 25th anniversary appeal, told the guests: “My mother, who believed passionately in this cause, would be proud of my association with Halo.

“In her special way, she adopted it as her own. She would join me – along with all of you, I’m sure – in praising Halo for the amazing work that it has done over the past quarter century, and in hoping that one day soon its humanitarian work will be done.”

He added: “At any one time, Halo has seven thousand de-miners in the field, striving to protect people, and banish the fear that pervades the lives of millions around the world.

“In Sri Lanka, Mozambique, Kosovo, in Somalia, Georgia and Armenia, the threat of landmines could be eradicated in the next five years, if funding can be sustained.

“If it were stepped up, in the next 10 years, countries like Cambodia, Angola, Colombia, Afghanistan, Burma and even Zimbabwe might have their landmine crises eliminated for good.”

The royal’s appearance was greeted by cheers and a standing ovation and the first lady added: “It is an honour to welcome Prince Harry to the White House today.

“As you all may know, Prince Harry is a captain in the Army Air Corps in the British Armed Forces.”

This reference to Harry’s role in the military received a loud cheer from the guests and Mrs Obama went on to highlight his career, saying: “In January he returned from his second deployment to Afghanistan.

“He has spent much of his time supporting our wounded warriors and the families of our fallen. This weekend he will be attending the 4th Annual Warrior Games at Colorado Springs.”

It was part of their Joining Forces project, a nationwide initiative launched in 2011 to encourage Americans to support and provide opportunities for the military and their families.

Before Harry was introduced to the military mothers he had joined their children who were making goody bags for Mother’s Day, celebrated on Sunday in the US, in the White House’s state dining room, filling them with bouquets ofroses, edible salted dough jewellery and baked crisps.

Earlier hundreds of screaming girls had given Harry a deafening welcome when he arrived at the Russell Senate Office building on Capitol Hill for the photographic exhibition highlighting the work of the Halo Trust.

He was joined by former presidential candidate Senator John McCain who stepped in as a replacement for his wife Cindy, a leading US anti-landmine campaigner, after she was taken ill.

Diana famously highlighted the work of the Halo Trust when she was pictured wearing a face mask and protective clothing during a visit to a minefield being cleared by the trust in Angola in 1997.

Happy Carlock 20, an intern from Texas, said the Prince surpassed her expectations: “You could hear hearts breaking all over the room when he left. He is so cute, better than I expected.”

Later today Harry will honour America’s war dead by laying wreaths at Arlington National Cemetery, where military casualties from the US civil war to Afghanistan are buried.

At his next engagement the royal will meet seriously injured military servicemen undergoing treatment at the Walter Reed National Military Medical Centre before attending a British Foreign Office reception in Denver. (The Scotsman)