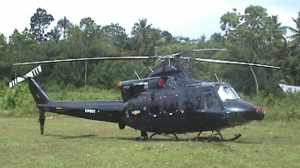 A Bell 412 helicopter carrying Sri Lankan Air force personnel including a high ranking officer made a precautionary landing at grounds in Katupotha this morning, due to a suspected technical fault.

Air force spokesman refused to comment regarding the identity of the passengers on board.

â€œAs a policy we do not disclose the personnel or rank of those on board, nor do we disclose the destination.

We are now taking measures to rectify the suspected defectâ€ he said.