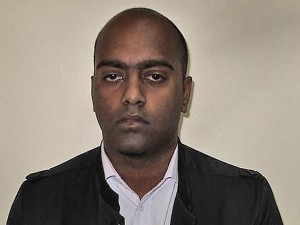 A finance manager at the Commonwealth Secretariat was jailed for 20 months today after stealing Â£375,00 of aid money with bogus expenses claims and fake contracts, the Times UK reported.

A judge questioned why it was so easy for Pradeep Moorthy to steal the money for four years after he became addicted to gambling following a trip to Las Vegas.

Britain gives the Secretariat Â£15 million of taxpayer funding each year, about a third of its total budget.

The inter-governmental agency based in Central London organises the Commonwealth Heads of Government Meeting which will be held in Sri Lanka in November.

The Commonsâ€™ public accounts committee criticised the Department for International Development (DFiD) in February for continuing to fund four international agencies, including the Commonwealth Secretariat, because they provided poor value for taxpayers.

Moorthy, 31, was a programme assistant with responsibility for the budget of the Secretariatâ€™s Social Transformation Programme Division (SPTD) and travel spending. The SPTD is responsible for overseeing aid programmes on improvement in child health, universal primary education and tackling Aids and malaria.

Over four years he plundered the budget by making cash payments of Â£58,000 for fictional travel expenses.

He also made bogus claims totalling Â£317,000 for consultancy work which were paid into the bank accounts of three school friends.

Southwark Crown Court was told the money had been destined for â€œsome of the poorest nations on Earthâ€.

James Norman, for the prosecution, said: â€œThe system was reliant, unwisely as it turned out, on the honesty of the people operating it.â€

Mr Norman said the system allowing employees to ask for cash payments in advance of travel has since been reviewed.

The court heard that Moorthy was taught by his Sri Lankan parents not to gamble but he succumbed to the vice after a holiday in Las Vegas in 2006.

David Phillips, for the defence, said: â€œHe resisted [gambling] on the first two days, but on the third day he succumbed. He enjoyed it so much that he couldnâ€™t resist the temptation of gambling.â€

Moorthy would routinely place bets on his way to work, during the day and on his way home, the court was told.

He recruited school friends Andre Turner, 32, Suresh Kadungala and Waseem Aslam, both 31, to pose as contractors to claim the money and help to launder the cash through their bank accounts in return for half the deposited money.

Moorthy was finally caught in December 2011 when he attempted to obtain a cash advance for an event in support of World Aids Day.

Judge Nicholas Loraine-Smith jailed Moorthy for three years and eight months for his â€œappalling abuse of trustâ€ after he admited fraud.

Kadungala and Aslam, who has repaid Â£35,000, had also pleaded guilty and each received a 15-month sentence, suspended for two years and were ordered to complete 200 hoursâ€™ unpaid work.

Turner, who pleaded guilty but claimed he had received 10 per cent of the deposited money, failed to appear in court and was sentenced to 20 months in jail in his absence. A warrant has been issued for his arrest.

Detective Constable Nikki Hubbard, of Westminsterâ€™s Economic and Complex Crime Unit, said: â€œMoorthy not only duped his friends, who will now have criminal records for life, he also was taking money to fund his gambling habit which had been earmarked for research into Aids, poverty and other welfare issues in some of the poorer Commonwealth countries.

â€œHe abused his position of trust for his own personal gain with little concern of how it would affect his friends or the impact he was having farther afield on those considerably less fortunate than him.â€