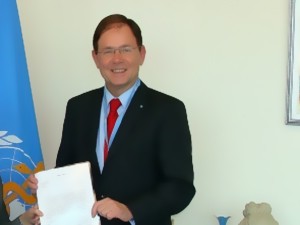 Speaking during the 22nd session of the UNHRC in Geneva today, the German Ambassador to the UN Hanns H. Schumacher said that Pillay is increasingly faced with unjust criticism.

He said that the statement made by Minister Mahinda Samarasinghe at the UNHRC this week constitutes an illustration to the Ambassadorâ€™s point.

Sri Lankaâ€™s Head of Delegation to the UN Human Rights Council had this week slammed Pillay for unfairly targeting Sri Lanka, calling her report to the Council â€œskewed and imbalancedâ€.

In a strongly-worded speech, especially with regard to the conduct of High Commissioner Pillay, Minister Mahinda Samarasinghe who is leading the Sri Lankan Delegation at the UNHRCâ€™s 22nd Session told the Council that undue internationalisation of Sri Lankaâ€™s domestic issues would hamper reconciliation efforts in the island.

Calling into question the bona fides of High Commissioner Pillay, who was sitting in the assembly room during the segment, Minister Samarasinghe charged that since May 2009 the High Commissioner had made regular negative observations about Sri Lanka both at UN and other forums.

â€œHer frequent comments to the media, some in close proximity to sessions of the Council, could well have the effect of influencing delegations, especially when there are Resolutions contemplated. This runs counter to the detachment, objectivity and impartiality expected from the holder of such an exalted office,â€ the Lankan Head of Delegation told the Council at the High Level Segment of the session

Meanwhile speaking today, the US delegation said that Sri Lanka must promptly implement the constructive recommendations of the Lessons Learned and Reconciliation Commission (LLRC).

The US delegation also said that Sri Lanka must address accountability for violations of international law and investigate allegations of war crimes.

The US delegation said it stands ready to help Sri Lanka address outstanding issues together with the assistance of Navi Pillayâ€™s office.