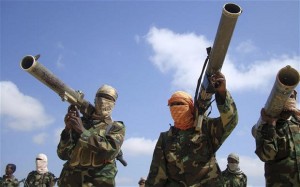 The country’s revolutionary authorities were warned of the loss of control of Gaddafi’s huge arms stockpiles at the end of the conflict, but the extent to which they had been ferried to insurgencies across the region became clear during recent fighting in Mali.

Then, weapons and explosives believed to be from Libya were used during the capture by al-Qaeda-linked militants of an oil facility in southern Algeria, in which scores of hostages including Britons were killed.

The new report by a special UN security council committee suggests that they have now travelled even further, with Libyan ammunition showing up in the continuing war being waged by al-Shabab, an al-Qaeda offshoot in Somalia.

Libyan weapons are also being seized in Egypt, with most destined for use by Palestinian groups in Gaza but some remaining in the sometimes lawless Sinai peninsula, the report says.

“In the past 12 months, the proliferation of weapons from Libya has continued at a worrying rate and has spread into new territory: West Africa, the Levant and, potentially, even the Horn of Africa,” it said.

“Illicit flows from the country are fuelling existing conflicts in Africa and the Levant and enriching the arsenals of a range of non-state actors, including terrorist groups.”

The committee is formally tasked with monitoring the UN arms embargo against Libya, imposed at the start of the uprising against Gaddafi in 2011. Its report analyses the flow of arms to insurgents during the fighting, and finds that key western allies which backed the rebels, Qatar and the United Arab Emirates, were in breach of the embargo.

Western nations themselves, including France and Britain, have not been accused of breaking sanctions despite taking part in the fighting by using aerial bombardment to police the no-fly zone and sending special forces to advise rebel officers, since no weapons changed hands.

Last year’s equivalent report worryingly found that publicity given to the approximately 20,000 surface-to-air missiles thought to be in the stockpiles had made the militias who now control most of the weapons less cooperative with attempts to trace and disable them â€“ possibly because their new owners had become aware of their political weight and economic value.

This year’s report alleges that civilians and militias remain in control of most stocks, and says the biggest obstacle to controlling the trafficking of weapons abroad, still illegal under the embargo, is the lack of an effective security system in the country.

Among the more startling claims in the report is one that 30 portable air defence systems have been sold by traffickers in Chad, and taken to the capital, Ndjamena.

Most weapons were going to Egypt for onwards passage to Gaza and Sahel countries like Mali, it says.

The Daily Telegraph and other journalists and investigators found unguarded fields and warehouses full of missiles, landmines, Semtex and other explosives, and other arms after Gaddafi fled his capital, Tripoli.

The finds were widely reported, but little was done to secure them. (The Guardian)