It was once Libya’s most forbidding place, the sprawling family compound where Muammar Gaddafi and senior regime figures lived behind impenetrable concrete walls. The Bab al-Aziziya complex in the centre of Tripoli was a city within a city, housing a network of underground tunnels, barracks and camouflaged villas.

Now Libya’s transitional government has come up with a plan to build the country’s new parliament building in the heart of Gaddafi’s collapsed empire. Officials have suggested that the complex could house the country’s new national congress. They are also planning a museum and a library. 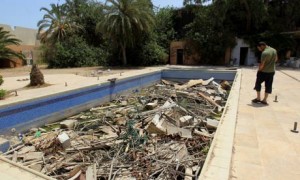 “I’m going to propose this. It’s very urgent,” Othman ben Sassi, general secretary of the outgoing National Transitional Congress (NTC), told the Guardian on Saturday night, shortly before polls closed on Libya’s first election for nearly 50 years. A 200-strong national congress, currently homeless, will replace the NTC next month. The congress will write a new constitution, and debate whether Libya’s fledgling post-Gaddafi state should have a parliamentary or presidential system.

For the moment, Libya’s elected representatives will meet in an opulent conference centre next to Tripoli’s Rixos Hotel. Ben Sassi said he wanted the new parliament building to be ready by late 2013, when fresh national elections are due to take place.

“[Bab al-Aziziya] is in the middle of Tripoli. People can walk inside, unlike in Gaddafi times when you couldn’t even go there. It will be our White House,” he said.

The enormous 2.3 sq mile complex is a festering ruin, used by Tripolitans as a grassy rubbish dump. Squatters have moved into several buildings that once housed Gaddafi’s elite troops; militia from Misrata have bulldozed and graffitied its olive-coloured outer walls. Where it was once illegal to stop, there is now a Friday flea market.

The proposed site for the new parliament building is Gaddafi’s once lavish reception hall – now a concertinaed heap of masonry, its top storey smashed in, and scattered with debris including an abandoned washing machine. The US cruise missile that once greeted Gaddafi’s guests vanished last year, together with furniture, fittings and other souvenirs taken by victorious revolutionaries.

Just up a grassy knoll, Abdullah ben Saud was showing visitors around Gaddafi’s former concealed mansion. Saud, a professor of engineering at Tripoli’s university, said he was sceptical about the plan to transform Bab al-Aziziya into a home for Libya’s new MPs.

He said: “This place should be a national park. All the other green areas of Tripoli were taken by the [former] regime to build their villas. We need it. The government has a lot to do before it builds itself a congress.”

Saud escorted his nieces, visiting from the US, upstairs into Gaddafi’s bedroom – a gutted wreck. Nearby was the late dictator’s whirlpool bath. A garden path overgrown with bougainvillea led to a private clinic, long ago looted, and the Gaddafi family’s private swimming pool. Nearby, a hidden entrance led to a bombproof green metal door and an underground tunnel.

On the other side of the site, several families have moved in. Al Hadi al-Shanosh said he and his wife, Khadija, had begun squatting in the complex in March, saving themselves 500 dinars (£280) a month in rent.

Asked what he thought about living next to the parliament, he replied: “Why not? Just use this huge space, I say. It’s government property, after all.”

Shanosh showed off the two-room building he called home – formerly a recreational mess used by Gaddafi’s officers. He had rigged up a 150m cable to provide electricity. There was also a kitchen and bathroom – though the knife and hammer by the front door suggested that security in Bab al-Aziziya was an issue.

If Ben Sassi’s vision is to become reality, the site will have to be cleaned up: in one corner, black smoke from burning rubbish could be seen drifting across a vista of palm trees.

One Tripoli resident said the congress would be better housed somewhere else, because of the compound’s lingering associations with tyranny and dictatorship. Abdalgader Beit El-Afia, selling eggs at the complex’s entrance, said the area should be concreted over and turned into offices. “Tripoli is Libya’s commercial heart. We need business,” he said, handing a tray to a passing motorist in exchange for four dinars.

And what about the tunnels? After all, a state of the art underground escape route wasn’t much use to a young democracy? “We don’t need tunnels any more,” Ben Sassi said, adding: “Though I suppose we could use them as a nuclear bunker.” (The Guardian).