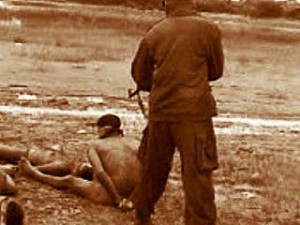 Sri Lankaâ€™sÂ  controversial president will travel to London for the Olympic Games in what could spark mass protests from Britainâ€™s Tamil community, The Independent has learned.

Mahinda Rajapaksaâ€™s spokesperson Bandula Jayasekara confirmed today that the 66-year-old president, whose government has been accused of committing war crimes, is planning to come to Britain shortly and may even attend the Gamesâ€™ opening ceremony on Friday evening.

Mr Rajapkasaâ€™s presence in the UK has often prompted large demonstrations from Britainâ€™s Tamil community who accuse his government of carrying out widespread atrocities against civilians and combatants during the 2009 war that finally wiped out the Tamil Tiger insurgency.

The United Nations says both sides committed war crimes during the conflictâ€™s brutal close which brought the Tamil Tigerâ€™s three decade campaign for an independent state crashing to the ground.

The threat of Tamil protests will inevitably be of concern to the Metropolitan Police because of the communityâ€™s ability to field huge numbers of demonstrators at such short notice. During the 2009 war, Tamil campaigners used mobiles phones to launch a surprise occupation of Parliament Square that lasted more than sixty days.

During Mr Rajapaksaâ€™s last visit to Britain for the Queen jubilee, hundreds of protesters brought traffic to a halt when they gathered outside the Commonwealth and a hotel in Park Lane where the President was staying.

Historically Britain and Canada have been the two most popular destinations among Tamil refugees and critics of the Sri Lankan regime. As a result Britainâ€™s Tamil community often had close links to Tamil nationalists and the Tigers themselves.

The Sri Lankan government has long accused the British authorities of not doing enough to clamp down on Tamil Tiger support and fundraising. Despite the growing wealth of evidence â€“ including videos showing summary executions and evidence of sexual violence committed by its soldiers â€“ Colombo has vehemently denied committing war crimes and publicly criticises those human rights groups and journalists who suggest otherwise. It has yet to allow the UN to conduct an independent investigation of war crime allegations. An independent investigation commissioned by the Sri Lankan government, meanwhile, was widely criticised by human rights groups and foreign governments for being partial and partisan.

Tamil activists contacted by The Independent today said it was likely new protests would break out if Mr Rajapaksa came to Britain.

â€œIt is wholly inappropriate for Mr Rajapaksa to be invited to Britain and particularly the Olympics,â€ said Jan Jananayagam, from Tamils Against Genocide. â€œThere is credible evidence that his government is responsible for ethnically motivated crimes against humanity and continuing persecution of other ethnic and religious groups in Sri Lanka. Just this week we released a report showing how government institutions such as the police and military under his command are involved in a systematic network of politically motivated disappearances as well as abduction for ransom.â€

Suren Surendiran, from the Global Tamil Forum, said they were looking at possible legal avenues they could pursue against the Sri Lankan delegation when they arrive in Britain.

â€œPresident Rajapaksa might be getting away from being arrested by hiding behind the cover of being a head of state, anyone else joining him with blood in their hands must know that we will deploy the full breath of the legal instruments available to us upon them,â€ he said.