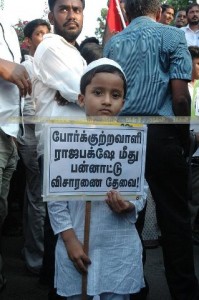 In India, Chief minister of Indiaâ€™s Madhya Pradesh state Shivraj Singh Chouhan has appealed to MDMK leader Vaiko to call off the protest against allied war criminal and Sri Lankan President Mahinda Rajapaksaâ€™s scheduled visit to Sanchi. In a letter to Vaiko, CM Chouhan said the function at Sanchi was completely apolitical, where Mr. Rajapaksa is due to lay the foundation stone of an International Buddhist University. The BJP leader assured Vaiko that he stood by the Tamils on the issue of human rights. Madhya Pradesh governmentâ€™s objective in setting up a university at Sanchi was to â€œbring together various civilisations of the Asian countriesâ€, he said. Vaiko has written a letter to Chouhan requesting him to withdraw the invitation to the Sri Lankan president, as people in Tamil Nadu blamed him for atrocities against Tamils in that country. Meanwhile, a resolution on Sri Lanka has been put before the U.S House of Representatives to be considered for discussion this week. The resolution urges the Government of Sri Lanka, the international community, and the United Nations to establish an independent international accountability mechanism to look into reports of war crimes, crimes against humanity, and other human rights violations committed by both sides during and after the war in Sri Lanka.]]>