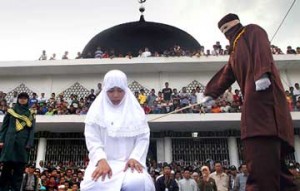 A Maldives court has sentenced a 15-year-old alleged rape victim to 100 lashes and eight months under house arrest after she admitted having had premarital sex in a separate incident, an official said on Wednesday.

During a police probe into allegations that the girl had been raped by her stepfather, investigators uncovered evidence that she had had consensual sex with another man.

“Though she has been sentenced she will be lashed once she turns 18,” the court official, who asked not to be named, told AFP. “But the sentence will be enforced immediately if she wants it to be carried out now.”

The child’s stepfather faces up to 25 years in prison if convicted of rape and a murder charge, after he allegedly killed a baby which resulted from his rape of his step-daughter.

The premarital sex charge against the teenager has been condemned by rights groups and the government has urged leniency towards the girl, saying she had been traumatised by the repeated rapes by her stepfather.

President Mohamed Waheed’s spokesman Masood Imad told AFP in January that the girl should be treated as a victim rather than a perpetrator of a crime.

It was unclear if the girl’s male partner would also be charged with having premarital sex.

The nation of 330,000 Sunni Muslims has been practising a liberal form of Islam for centuries. But in recent years men and women have been prosecuted for sex outside marriage.

Minors are liable for the punishment when they reach 18, the age of majority. The Maldives continues to subject women to flogging despite UN calls to drop the practice.

In September a Maldivian court ordered the public flogging of a 16-year-old who confessed to premarital sex. Her lover was jailed for 10 years.(courtesy NDTV)