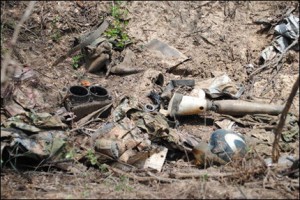 An investigation has been launched at a construction site in Vakarai in East where human bones were found.

The area has been cordoned off after construction workers found the human remains.

The discovery comes even as investigations continue into the nearly 100 skeletal remains and 13 human bones unearthed from the mass grave in Matale.

At least 10 skeletal remains were first found from the site near the Matale hospital in November last year by construction workers when land near the hospital was being dug-up to construct a new building.

The JVP had demanded that the government carry out investigations regarding the mass grave found at Matale following fears the remains maybe that of JVP members or supporters killed during in the 1987-89 insurgency.

The JVP said that from the manner the skeletal remains were placed it was confirmed that this was a mass grave.