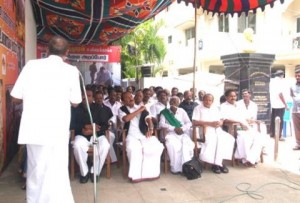 Tamil Nadu’s MDMK party yesterday demanded an international referendum with the supervision of United Nation Organisation to decide on the separate Tamil Eelam issue as it would be the only answer for sufferings of Tamils in the island nation. The Partyâ€™s High level Committee member Senthilathiban and spokesman Nanmaran,briefing newsmen on the deleberations at Anna Birth centenary and the Dravidian movement centenary conference, said a resolution to this effect was adopted at the conference. They said MDMK was very firm on its stand that separate Tamil Eelam was the only answer to solve the ethinic Tamils issue in the island nation, The party will not compramise on this under any circumstances,they said. The resolutioon said soon after the â€˜Mulveli massacreâ€™ the Lankan Government was housing the Sinhalese population in Tamil areas.The MDMK will continue its opposition to Sri Lankan President Mahindra Rajapakse until he is brought before the international court of law. The party was also of the view attacks against Indian Fishermen by Lankan naval personnel were continuing, So far,570 fishermen have been killed, In order to protect the interest of the Indian fishermen especially those from Tamil Nadu, The MDMK will hold fishermen Livelyhood rights conference at Tuticorin on November 24, next, they said. The conference also resolved that MDMK was also very firm on introducing total prohibition in Tamil Nadu and would create an awareness among the people. (Chennai online)]]>