Russiaâ€™s Urals region has been rocked by a meteorite explosion in the stratosphere. The impact wave damaged several buildings, and blew out thousands of windows amid frigid winter weather. Hundreds have sought medical attention for minor injuries.

Around 950 people have sought medical attention in Chelyabinsk alone because of the disaster, the region’s governor Mikhail Yurevich told RIA Novosti. Over 110 of them have been hospitalized and two of them are in heavy condition. Among the injured there are 159 children, Emergency ministry reported. 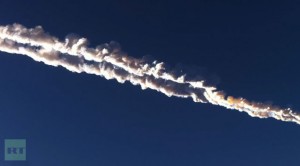 Army units found three meteorite debris impact sites, two of which are in an area near Chebarkul Lake, west of Chelyabinsk. The third site was found some 80 kilometers further to the northwest, near the town of Zlatoust. One of the fragments that struck near Chebarkul left a crater six meters in diameter.

Servicemembers from the tank brigade that found the crater have confirmed that background radiation levels at the site are normal.

Experts working at the site of the impact told Lifenews tabloid that the fragment is most likely solid, and consists of rock and iron.

A local fisherman told police he found a large hole in the lakeâ€™s ice, which could be a result of a meteorite impact. The site was immediately sealed off by police, a search team is now waiting for divers to arrive and explore the bottom of the lake.

Samples of water taken from the lake have not revealed any excessive radioactivity or foreign material. 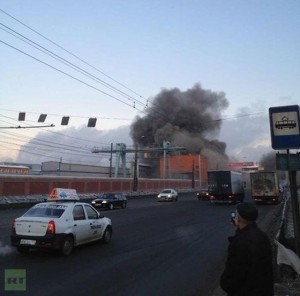 Russian space agency Roskosmos has confirmed the object that crashed in the Chelyabinsk region is a meteorite:

â€œAccording to preliminary estimates, this space object is of non-technogenic origin and qualifies as a meteorite. It was moving at a low trajectory with a speed of about 30 km/s.â€

According to estimates by the Russian Academy of Sciences, the space object weighed about 10 tons before entering Earthâ€™s atmosphere.

Â­A meteorite is a solid piece of debris from space objects such as asteroids or comets, ranging in size from tiny to gigantic.When a meteorite falls on Earth, passing through the atmosphere causes it to heat up and emit a trail of light, forming a fireball known as a meteor, or shooting or falling star.

A bright flash was seen in the Chelyabinsk, Tyumen and Sverdlovsk regions, Russiaâ€™s Republic of Bashkiria and in northern Kazakhstan.

The Russian army has joined the rescue operation. Radiation, chemical and biological protection units have been put on high alert. Since the explosion occurred several kilometers above the Earth, a large ground area must be thoroughly checked for radiation and other threats.

According to preliminary reports, the worst damage on the ground in Chelyabinsk was at a zinc factory, the walls and roof of which were partially destroyed by an impact wave. The city’s Internet and mobile service were reportedly interrupted because of the damage inflicted near the factory. 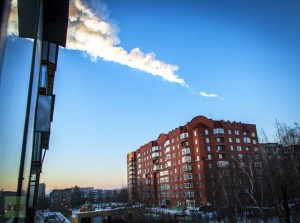 Chelyabinsk administrationâ€™s website said nearly 3,000 buildings were damaged to varying extents by the meteor shower in the city, including 34 medical facilities and 361 schools and kindergartens. The total amount of window glass shattered amounts to 100,000 square meters, the site said, citing city administration head Sergey Davydov. The ministry also said that no local power stations or civil aircraft were damaged by the meteorite shower, and that â€œall flights proceed according to schedule.â€

Buildings were left without gas because facilities in the city had also been damaged, an Emergency Ministry spokesperson said, according to Russia 24 news channel.

The local newspaper Znak reported the meteorite was intercepted by an air defense unit at the Urzhumka settlement near Chelyabinsk. Quoting a source in the military, it wrote a missile salvo blew the meteorite to pieces at an altitude of 20 kilometers.

Regnum news agency quoted a military source who claimed that the vapor condensation trail of the meteorite speaks to the fact that the meteorite was intercepted by air defenses.

Witnesses said the explosion was so loud that it seemed like an earthquake and thunder had struck at the same time, and that there were huge trails of smoke across the sky. Others reported seeing burning objects fall to earth.

A spokesperson for the Urals regional Emergency Ministry center claimed it sent out a mass SMS warning residents about a possible meteorite shower. However, eyewitnesses said they either never received it, or got the message after the explosion had occurred. The Emergency Ministry has since denied sending out the SMS warning, and said the spokesperson that spread the false information â€œwill be fired.â€

Classes for all Chelyabinsk schools have been canceled, mostly due to broken windows. Institute students have been dismissed until next.