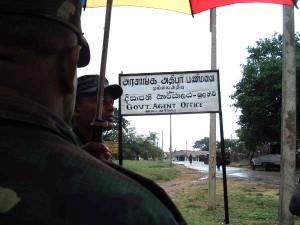 Catholic Bishop of Jaffna, Rt. Rev. Thomas Savuntharanayagam, has pointed out to the visiting Canadian Special Envoy for the Commonwealth, Senator Hugh Segal, the Commonwealth can play a great role in bringing an end to the ethnic issue in the island.

Senator Segal visited the Bishop at the Bishop’s House on Wednesday (20) and discussed a wide range of issues, particularly the current situation in the North. He was accompanied by senior officials of the Canadian High Commission in Colombo.

Bishop Savuntharanayagam, elaborating on the post-war situation in the North said, as a result of the delays in expediting the process to find a solution to the political aspirations of the Tamils, communal tensions seem to be resurging in the country. “A large number of civilians have disappeared during the final phase of the war. Hundreds of Tamil political prisoners are still detained without trials. Partial treatment, when handing out jobs and educational opportunities still prevail in the country, and the minorities have been very much neglected. The government, which has a two-thirds majority in Parliament, is acting in a dictatorial manner. Therefore, the Tamils in the North and East are losing hope over an amicable settlement to their political and humanitarian problems,” the Bishop alleged.

Commenting further on the military presence in Jaffna, the Bishop said, SL President Mahinda Rajapaksa has mentioned around 20,000 troops have been withdrawn from the North.

“However, the presence of the army personnel in Jaffna is on the increase. The Security Forces are grabbing more and more lands from the people and putting up new installations.

The new army camps and the acquisition of lands in the North are creating panic among the Tamil people, who had already suffered for three decades due to war,” Bishop said.