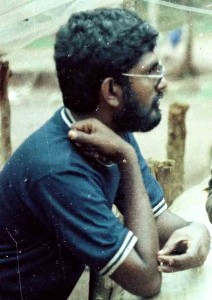 On Tuesday late evening, more than 400 people, including 100 women and children, gathered at Puliyoor, a non-descript village in Salem district, and lit candles to remember the fallen heroes of a war fought across the seas an Indian media reports. At Ponnammaan Memorial Bus Shelter at Puliyoor Pirivu here, men, women and children from Puliyoor, Mettur Dam,Â  Kolathur and surrounding villages stood in a line, with candles in hand, as they have been doing for the past 21 years, to remember Tamils who died fighting Sri Lankan army during the three decades of ethnic strife. They sang songs in praise of the heroes and for the Eelam. November 26 is the birthday of Velupillai Prabhakaran. LTTE used to commemorate the day after as Heroes Day, when the outfit led by its leader would pay homage to its dead cadres. It’s that tradition Puliyoor too adopted. “The (LTTE) cadres fought for the rights and died for the Sri Lankan Tamils. We salute them for their sacrifice,” said S Kanagarathinam, 37, a resident of Mettur Dam, who attended the event with her husband, Mullaivendan. The village’s tryst with Eelam began when a training camp for the LTTE was set up in the village in 1983. For three years, over 800 cadres were trained by Lt Col Ponnammaan of the LTTE at the camp. “In January 1983, over 130 cadres of LTTE got training inÂ  Kumbarapatti village. The public of Kumbarapatti, Kolathur and surrounding areas gave rice and cereals to them. The cadres mingled with the public and explained the situation of Sri Lankan Tamils. The name of the village was changed to Puliyoor (the village of Tigers) after the training camp,” said P S Palanisamy, a resident. Three batches of cadres got trained in Puliyoor from 1983 to 1985 and most of them were killed in the war, according to the villagers. “I used to buy food materials for LTTE cadres and I spent three years with them. I met Prabhakaran when he visited the camp. Prabhakaran met the public who helped their cadres and thanked them,” said A Balasubramaniam of Kolathur. 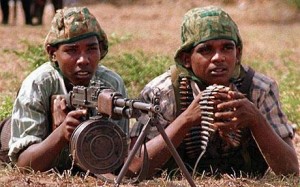 Balasubramaniam named his son Thambi Prabhakaran as he had “great regard” for the man and his ideals. Thambi is now 20. There are many others in his age group who carry names that recall LTTE leaders. The Eelam is not part of history for these villagers. In fact, many of the villagers believe that the Prabhakaran is still alive and could re-launch the war anytime. “We believe that Prabhakaran is alive and he will appear before the world soon,” said Palanisamy.]]>