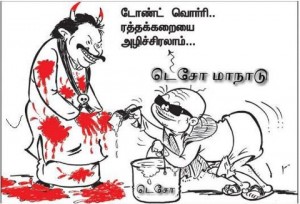 DMK president M Karunanidhi on Wednesday virtually withdrew his partyâ€™s opposition to Sri Lanka President Mahinda Rajapakseâ€™s visit to Madhya Pradesh on September 21 to lay the foundation for a Centre For Buddhist Studies in Sanchi. In a long statement issued on Wednesday, the DMK chief dwelt on the attack against Lankan tourists and said the fundamental distinction between â€œimparting training to Lankan military personnel in our army establishmentsâ€ and the visiting sporting and cultural teams should be noted. He also blamed the Tamil Nadu government led by Jayalalitha for sending back the two Sri Lankan football teams, which was followed by the attack on visiting Lankan pilgrims on Tuesday. Meanwhile, MDMK leader Vaiko dashed off a letter to Madhya Pradesh Chief Minister Shivraj Singh Chauhan on Wednesday, urging him to â€œcancelâ€ the religious ceremony at Sanchi in which Rajapakse is slated to participate, as the latterâ€™s government was responsible for the â€œgenocideâ€ of the Tamils in Lanka. â€œI will myself lead a peaceful, black-flag demonstration of MDMK cadres against Rajapakse at Sanchi,â€ if the function is allowed, Vaiko added.      ]]>