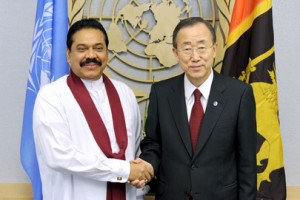 The Sri Lankan President Mahinda Rajapaksa is likely to meet UN Secretary General Ban Ki-Moon at the UN headquarters in New York later this month. HeÂ is scheduled to address the General Debate of the 67th session of the UN General Assembly which begins on September 25th in New York. According to the provisional list of the General Debate he is scheduled to speak on September 26th, in the afternoon. Leaders from several other countries will also address the General Debate and will have side meetings with other world leaders as well as the UN Chief. Last September Mahinda, who addressed the 66th session, had a one on one meeting with Ban Ki-moon and discussed the â€˜UN reportâ€™.]]>