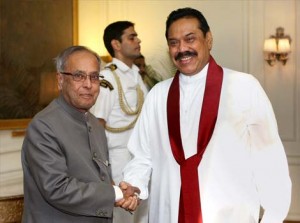 It is no secret that the assurance the government received that Commonwealth Heads of Government Meeting (CHOGM) will definitely be held in Sri Lanka as scheduled carried Indiaâ€™s imprimatur.

Speculation as to who in the Indian polity pulled it off for President Mahinda Rajapaksa gained considerable interest in the local political guessing game. Now, it has come to light through sources at the Ministry of External Affairs, the knight in armour, who came to the rescue was none other than Mahindaâ€™s erstwhile friend, Pranab Mukherjee, President of India.

It is now emerging that Rajapaksa had solicited Mukherjeeâ€™s help to charm India so that it would help Sri Lankan in this hour of grave need; albeit extending its support for the US sponsored UNHRC resolution brought against Sri Lanka at the Geneva sessions

The Rajapaksa-Mukherjee camaraderie started during the latter part of war, when Mukherjee was Indiaâ€™s Foreign Minister. At that time, Tamil Naduâ€™s then Chief Minister, M. Karunanidhi was clamouring for Indian Government intervention to put a stop to it, threatening to withdraw its support from the coalition government. Feeling the gravity of the situation, Rajapaska sent his brother Basil to meet Mukherjee, to work out a solution. Immediately after Basil left India, Mukherjee met with Karunanidhi in Tamil Nadu at Sonia Gandhiâ€™s request. It was after the Mukherjee, Karuarunanidhi tÃªteâ€“Ã â€“tÃªte, the latter agreed to withdraw his threat to leave the government.

Amidst various speculations as to how Mukherjee tamed Karunanidhi, one which gained currency in the Indian news media was that he warned Karunanidhi that corruption allegations against his family members could be revived if he did not back out from the confrontational stance he had assumed, challenging the central government. Yet others in the Indian media conjectured that Mukherjee had given a dead rope to Karunanidhi to the effect that when Prabhakaran is annihilated he would naturally become the supremo of the ethnic Tamil people, which Karunanidhi swallowed hook, line and sinker. Whatever it was that Mukherjee used as bait, it attained its goal of keeping Karunanidhi silent on the war thereafter.

A Wikileaks cable datelined 29 January 2009 revealed an interesting bit of information. It said Mukherjee, who visited Sri Lankan at around this time did not try to discourage Sri Lankaâ€™s war effort in anyway.

The cable reads as follows:

â€œFrom Mr. Mukherjeeâ€™s statement at the end of his visit, it was clear that India did not oppose the operations. â€˜I stressed that military victories offer a political opportunity to restore life to normalcy in the Northern Province and throughout Sri Lanka, after twenty three years of conflict. The President assured me that this was his intentâ€™.â€

In February 2009, when Tamil Nadu politicians were engaged in verbal pyrotechnics against Sri Lanka, Mukherjee, as the Indian Foreign Minister made the following special announcement in Parliament as reported in the media.

â€œExternal Affairs Minister Pranab Mukherjee bluntly told the TN members that the Liberation Tigers of Tamil Eelam (LTTE) did not deserve any sympathy because of the damage it had caused to the Tamil Community. He also made it clear that Delhi cannot force a sovereign government of another country to take a particular line.

Mukherjee reiterated the Delhi line, which was articulated by Home Minister Palaniappan Chidambaram on Sunday in Chennai that LTTE should lay down arms.

There is a political opportunity after 23 years to restore normalcy in Northern Sri Lanka and India is ready to assist in help in reconstruction and development there, he said.

In his statement, Mukherjee said. â€œâ€¦ Government of India has no instrumentality under which it can force a sovereign government to take a particular action. This is not simply possible.â€ The minister pointed out that since the mater concerned another country, India has to deal with another sovereign government. He, however, said the House and the government share the â€˜angerâ€™ over killing of civilians in crossfire in conflict zone of Sri Lanka and wants â€˜the conflict to come to an end.â€™

Mukherjee assured Parliament that the government remained concerned over the safety and security of innocent Tamils and was ready to provide all possible help in their evacuation from the conflict zone. He added, India wants Tamils in Sri Lanka to get their â€˜rightful placeâ€™ for which they have been yearning for over two decades. The government will try to ensure that. (India gave no help in the evacuation of civilians from the conflict zone. The civilians were herded into military confinement camps and endured murder and rape and lived under miserable conditions. This was a far cry from what India did during the East Pakistan war in 1971)

Reminding members that LTTE is a â€˜proscribed organizationâ€™ in India and that it had caused â€˜much damageâ€™ to Tamil community, even using civilians as human shields, he remarked: â€˜As the conflict enters what may be the final phase of military operations, the LTTE would best serve that interest of the Tamils by immediately releasing all civilians and laying down armsâ€™.

Pressing for early start of normal democratic political processes in the Island nation, Indiaâ€™s External Affairs Minister said, â€˜after 23 years of conflict, there is today a political opportunity to restore life to normalcy in the Northern Province and throughout Sri Lankaâ€™. India, he added, continues to support a negotiated political settlement in Sri Lanka within the framework of an undivided Sri Lanka acceptable to all the communities, including the Tamil community.

He renewed India’s stand on full implementation of the 13th Amendment to Sri Lankan Constitution, saying it would be a significant first step towards bringing about a political settlement to the issue. The 13th Amendment was introduced to give effect to the India-Sri Lanka accord in 1987. â€œGoing beyond the 13th Amendment on the question of devolution of powers would be significant,â€ he observed and said President Mahinda Rajapaksa had assured him on January 27 in Colombo that he intended to start political processes in north Sri Lanka.â€ ( What is going on in Sri Lanka today is colonisation of the Tamil Homeland by Sinhalese settlers and India is quite about it.)

Mukherjeeâ€™s especial announcement made in Lok Sabha shows the intense level of his help to Sri Lanka during the war. At that time he acted as middleman between India and Sri Lanka, exchanging important information between the two countries.

After the 2009 Indian General Election, Mukherjee became Finance Minister; yet he delivered the Kadiragamar Commemoration Oration as former Foreign Minister of India. It was during this visit he met President Rajapaksa to deliver an important message; that of the necessity of finding a post-war political solution to the ethnic problem.

The Indo-Sri Lanka relations had already soured up by the time Mukherjee assumed Presidency in India. With India condoning the UNHCR resolution against Sri Lanka, relations between the two countries had further deteriorated. With the situation growing worse day by day, a meeting with Mukherjee became a top priority for Rajapaksa. In September 2012 he was able to have this all important meeting and made a direct personal appeal to Mukherjee to intervene and use his good offices to help improve Indo-Sri Lanka relations.

Rajapaksa felt Mukherjee, a friend of his, could help him in this matter, even though he was no longer the Foreign Minister of India; especially in view of the fact that he was a close associate of the Gandhi family. Rajapaksa heavily banked on Mukherjeeâ€™s personal connections with Indiaâ€™s powerful Gandhi dynasty; and rightly so, as it later transpired.

Mukherjee assumed responsibility of repairing waning bilateral relations between the two countries subsequent to the adoption of the UNHRC resolution against Sri Lanka in the March 2013 Geneva sessions. Sometime before that, in his address to the Parliament as President, he had made reference to the importance of improving ties with Sri Lanka; to which Karunanidhi had taken umbrage. The Hindu reported it as follows:

â€œDMK president M. Karunanidhi, an ally of the Congress-led UPA at the centre, on Saturday criticized the reference made by the President in his address to Parliament on improving ties with Sri Lanka.

â€œWhen the entire world has taken note of Sri Lankan President Mahinda Rajapaksaâ€™s dictatorial policies and condemned him as an international war criminal, I am not able to understand why the President in his address should talk about improving the countryâ€™s relationship with Sri Lanka. When will India understand the man who sports a smiling face but harbours a heart full of poisonous vengeance?â€ he said in statement.

Mr. K Karunanidhi said though the situation in Sri Lanka had reached such a pass that Chief Minister Jayalalithaa was â€˜shedding crocodile tearsâ€™, President Pranab Mukherjee was trying to paper over the real problems faced by Tamils in the country.â€

Mukherjeeâ€™s powerful hand was visible in the act of preventing the Indian Parliament from adopting an anti-Sri Lankan resolution, promoted by combined Tamil Nadu political parties, in the run up to the UNHRC resolution. He was able to convince the other partners in the Congress Alliance about the possible adverse fallout from such action.

In an objective assessment of the events under discussion, it standout to reason without any doubt, that the architect of the CHOGM victory for Sri Lanka was none other than Mukherjee. He pulled it off as sine qua non for holding elections for the Northern Provincial Council, as India has been urging Sri Lanka all along. When Mukherjee became President of India, his former diplomatic role may have undergone some change; but obviously Sonia Gandhi was very much alive to the fact, that if anyone could persuade Mahinda Rajapaksa to hold Northern Provincial Council elections, it was Mukherjee undoubtedly.