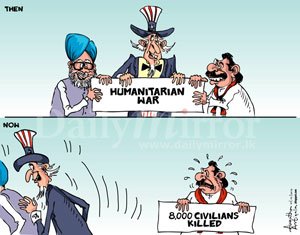 The Indian media quoted the president as telling parliament that India was making progress in its engagement with Sri Lanka.

This involved â€œour efforts to resettle and rehabilitate the internally displaced persons thereâ€, he said, referring to thousands who were pushed out of their homes due to the war.

The president made no reference in his speech to allegations of human rights abuses that Sri Lanka is battling, including the alleged cold-blooded killing of the 12-year-old son of the LTTE chief.