Mohammad Ajmal Amir Kasab, the only gunman to have survived the 2008 terrorist attacks on Mumbai, has been hanged in the central Indian city of Pune and buried in the prison yard. 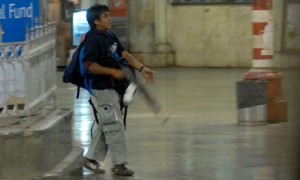 The execution – carried out days before the fourth anniversary of the attacks – was the first in India since 2004 and only the third in the past 17 years. The Indian minister for home affairs, Sushil Kumar Shinde, announced the execution, saying the president, Pranab Mukherjee, had turned down Kasab’s appeal for clemency. “It was decided then that on 21 November at 7.30 in the morning he would be hanged. That procedure has been completed today,” Shinde told reporters on Wednesday morning.

Kasab, 24, was the only survivor of the group of gunmen who killed more than 160 people over three days in a string of attacks targeting luxury hotels, a railway station, tourist cafes and a Jewish centre. A photograph of Kasab walking through Mumbai’s main railway station with an AK-47 assault rifle and a rucksack crammed with ammunition became an enduring image of the attack.

Sachin Kalbag, editor of Mumbai’s popular MidDay newspaper, said news of the execution had brought “considerable relief across the city and joy in some pockets where the most murders were committed.

“Any happiness is not over the execution but because there is now some kind of closure for the families of those who died that day,” he said.

Leaders of Lashkar-e-Taiba – the extremist group blamed by India for the attacks – said Kasab “was a hero and will inspire other fighters to follow his path”.

The Pakistan Taliban said they were shocked by the hanging. “There is no doubt that it’s very shocking news and a big loss that a Muslim has been hanged on Indian soil,” a spokesman told Reuters.

Others in Pakistan said the execution of Kasab would make it harder to prosecute those who co-ordinated the attack by mobile phone from a house in Karachi, the southern Pakistani port city.

“If we are to go after the network we have to have living evidence, but now we only have what is in the files,” said Khalid Munir, a retired army colonel. “[Kasab] may have only been an operator, a foot soldier for those guiding him, but he could have given more information, given evidence in the Pakistani courts. The Bombay case ends here,” he said.

Pakistan’s interior minister, Rehman Malik, has in the past said the country has been unable to take action against Hafiz Saeed, the cleric accused of heading Lashkar-e-Taiba, because evidence provided by India is “vague and insufficient”. Delhi has denied the claim.

Talat Masood, a former general, said the more important problem was a lack of political will in Pakistan. “If they were really determined they could punish these people, but the problem is the weakness of the state,” he said. “They think that at the moment they can’t afford an angry reaction from the militants.”

Pakistan has denied that its security agencies are in any way connected to the attack and says it is prosecuting seven suspected militants for their role.

Testimony to American and Indian investigators from David Headley, a Pakistani-American involved in the plot, implicated junior officials within the Directorate of Inter-Services Intelligence, Pakistan’s main military security agency. There was no evidence that senior officials had knowledge of the plot, or at least its full extent, Headley indicated.

Human rights groups criticised the execution. “The hanging of Ajmal Kasab marks a concerning end to [India’s] moratorium on capital punishment. Instead of resorting to the use of execution to address heinous crime, India should join the rising ranks of nations that have taken the decision to remove the death penalty from their legal frameworks,” said Meenakshi Ganguly, the south Asia director of the campaign group Human Rights Watch.

On Tuesday a United Nations committee adopted a draft resolution calling for a moratorium on capital punishment. India was among 36 countries – including Pakistan, the US, Singapore, Egypt, Japan, China and Sri Lanka – who opposed the resolution, citing the right of each sovereign nation to decide its own legal system.

Few analysts thought the killing of Kasab would interfere with political efforts in Delhi and Islamabad to improve relations between the two countries. On Tuesday the Pakistani president, Asif Ali Zardari, ratified a long-planned relaxation of visa requirements for Indians travelling in Pakistan.

Indian analysts, however, say a repeat attack like that of 2008 could bring about a war between the two countries and criticise precautions taken to prevent such an attack. The absence of sectarian violence after the attack has been seen as a testament to the strength of India’s secular democracy. Dr Zafarul-Islam Khan, who runs the Delhi-based Urdu-language Milli Gazette newspaper, said Indian Muslims had no “concern” for Kasab. “Any terrorist should be hanged. He should have been executed long ago,” Khan told the Guardian. (The Guardian).