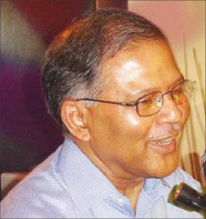 He will be in-charge of East Asia.

His name has been sent for approval to the appointments committee of the Union Cabinet that approves all secretary- level appointments in the government.

Kantha has also served as joint secretary heading the East Asia division in the MEA.

Interestingly, overcoming political rivalry the UPA government cleared Kanthaâ€™s name despite several other claimants for the post and jockeying by the aspirants.

Kantha is the son-in-law of former external affairs and finance minister and BJP leader Yashwant Sinha. â€œHe was chosen because of his excellent professional skills as a diplomat who has a wide experience in the region,â€ a source told MAIL TODAY.

Kanthaâ€™s choice is good considering that he will be able to handle issues such as defending Indiaâ€™s interests in the South China Sea.

He will also be able to provide a nuanced approach in dealing with China as a former head of the East Asia division in the foreign office.

He is from the 1977 batch of the Indian Foreign Service and has also served as Indiaâ€™s envoy to Malaysia. Kantha will replace Sanjay Singh who will retire in April this year.