The new U.S Ambassador to Sri Lanka visited the north over the last couple of days and had wide ranging discussions with officials and people in the area.

Ambassador Michele J. Sison visited Jaffna and Kilinochchci as part of her northern trip, her first since she took over as the Ambassador to Sri Lanka recently.

During her meetings in Jaffna Ambassador Sison met with the Muslim Federation of Jaffna and discussed several issues including on the displaced and the needs of the Muslim community, the U.S Embassy said.

The Ambassador had, during that meeting, reiterated US opposition to a controversial anti Islam video which had resulted in protests against the U.S government in several countries. 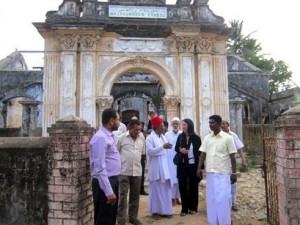 Meanwhile the US Embassy in Colombo said that Sison handed over fishing supplies to 130 families in Kallar, Killinochchi yesterday.

This donation, through the U.S. Embassyâ€™s development arm, United States Agency for International Development (USAID), is part of a larger initiative of partnering with families in conflict-affected areas, bringing dignity back to their communities.

Speaking at the handover ceremony in the Killinochchi district, Ambassador Sison said, â€œYou have advocated, against many difficulties, to secure access to the sea. You have travelled across the district, searching for a better way of living. It is our hope that these 10 boats, the nets and gear will assist you as you continue to restore your lives; the U.S. Government is committed to helping rebuild Sri Lankaâ€™s communities with initiatives such as this one.â€