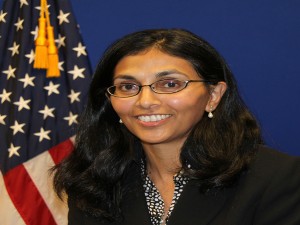 In a striking development, US President Barack Obama nominated Nisha Desai Biswal, an accomplished Indian-American administrator, to head the South Asia bureau in the US state department.

When confirmed by the Senate, Desai will become the first person of Indian or even South Asian origin to head the bureau, which oversees US foreign policy and relations with India, Pakistan, Bangladesh, Afghanistan, Sri Lanka, Nepal, Maldives and Bhutan. She is currently the assistant administrator with USAID, which is also headed by an Indian-American, Rajiv Shah, the Times of India reported.

Desai Biswalâ€™s nomination is unprecedented in the sense that the South Asia bureau has always been headed by â€œall-Americanâ€ diplomats, although there have been many mid-level staffers who are US-born but are of sub-continental origin. Previous assistant secretaries of the South Asia bureau from the time it was formed in 1991 are Robin Raphel, Karl Inderfurth, Christina Rocca, Richard Boucher, and Robert Blake â€“ in that order.

The White House announcement said the President intended to nominate Nisha Desai Biswal as assistant secretary of state for â€œSouth Asian Affairs,â€ although in the State Department it is formally known as â€œBureau of South and Central Asian Affairsâ€ dealing also with the five Central Asian â€œstansâ€ â€“ Kazakhstan, Kirghiztan, Tajkistan, Uzbekistan, and Turkmenistans. The South Asia bureau itself was originally carved out from what was the Nearest Eastern and South Asian Affairs bureau, with the Central Asian countries added to it some years back.

Desai Biswal, who is a graduate of the University of Virginia, began her professional career in Washington DC with the American Red Cross in the mid-90s before she joined USAID in her first stint. As a Hill staffer with the US House of Representatives International Relations Committee from 1999 to 2002, she worked extensively with diplomats from the region before doing another stint with the NGO InterAction. From 2005 to 2010, she was the Majority Clerk for the State Department and Foreign Operations Subcommittee on the Committee on Appropriations in the US, a crucial position close to the purse strings of American foreign aid.

Her appointment was met with much delight in the Indian-American community with great approval voiced over social media. Although there have been several other Indian-Americans at the assistant secretary level ( Bobby Jindal, Richard Varma, Karan Bhatia, Suresh Kumar among them), this is the first time an Indian-American is heading the South Asia bureau, a new milestone for the community.