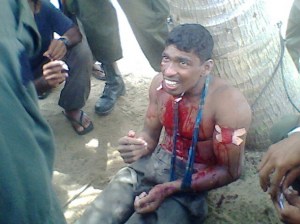 Callum Macraeâ€™s No Fire Zone surveys the final months of Sri Lankaâ€™s recent civil war, but not merely to bring attention to yet another little-understood and woefully neglected Third World conflict.

By making extensive use of video clips clandestinely recorded by victims and perpetrators alike, Macrae and his collaborators set out to expose an astonishing list of crimes against humanity systematically committed by Sri Lankan government forces â€“ crimes the government continues to vehemently deny.

The parade of atrocities exceeds even the most hardened viewerâ€™s tolerance for human suffering. A mother describes watching her children die. A woman recalls collecting pieces of a baby for a makeshift burial. Bodies mutilated from shelling are wheeled into a hospital that is itself about to be shelled.

The raped and executed corpses of female Tamil fighters lie half-stripped in the mud. â€œI would like to fuck it again,â€ a soldier exclaims off-screen. No-fire zones were established and promptly flooded with desperate civilians, and those same zones were repeatedly bombarded, the under-supplied hospitals that lay within their boundaries specifically targeted.

Was this campaign too indiscriminate to count as genocide? Was it just senseless slaughter, an exercise in total, crushing power? No Fire Zone is both a documentary and a horror film. Its images are sufficiently graphic to give you nightmares â€“ but sometimes it takes a nightmare to wake us up.