The no-fly zone is the latest in security measures that have been criticized for putting Londoners at further risk from terrorist attacks rather than protecting them. 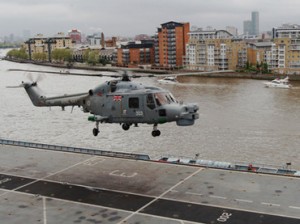 The RAF warned that rogue aircraft that stray into the no-fly zone above London could be shot down.

“As a last resort, we will have lethal force as an option,” said Air Vice-Marshal Stuart Atha, the Olympicsâ€™ air security commander, at a briefing at the RAF Northolt base in West London. He added that such a situation would be a â€œworst case scenarioâ€ and the decision would be made at the â€œhighest level of government.â€

The new no-fly restrictions came into force at midnight on Friday and encompass the central London area, the Olympic Park in Stratford and a large part of the Southeast.

While commercial flights will not be affected by the measures, light aircraft, gliders and hot air balloons will be expected to adhere to flight regulations until August 15.

Teams of military personnel will be on constant watch for craft that stray into the restricted zone. If any suspicious planes are sighted, Typhoon fighter jets and helicopters will be deployed to escort them out of restricted air space. Any craft that does not respond to warnings by the RAF may be gunned down.

The â€˜militarizationâ€™ of the Games

UK authorities are leaving nothing to chance during the Olympics, deploying 17,000 military personnel throughout the capital for the duration of the Games, 11,800 of which are soldiers.

In spite of widespread protests, the government is also installing surface-to-air missiles flanking the Olympic Park in East London.

London residents reacted with uproar, claiming that they were not properly consulted over the defense plans. They appealed for a judicial review, arguing that their human rights had been violated and voicing concerns that the presence of missile installations could turn their homes into potential terrorist attack targets.

â€œIf it’s going to affect our children, our own safety, our security, then there’s a potential for people who are evil-minded who may sabotage the situation. Iâ€™m a father of young children, so I have reservations about having missiles placed here,â€ said one tenant to ABC Radio.

However, their court appeal was overturned on the basis that the missiles pose no legitimate threat to residents.

The UK government has spent more than 1.5 billion pounds on safety measures at the Games in the countryâ€™s biggest peacetime security operation in history. (RT News)