<![CDATA[Two of nuclear power's greatest champions dealt the industry a heavy blow on Friday, with Japan deciding to phase out its plants and France confirming plans to cut its heavy reliance on the technology following concern over the Fukushima disaster. Japan, which produced more than 10 percent of global nuclear power before it suffered last year's accident at Fukushima, joins Germany, Switzerland and Belgium in deciding to shut down nuclear plants and to spend money on renewable energy instead. <a href="http://www.eelamenews.com/?attachment_id=103014" rel="attachment wp-att-103014"> 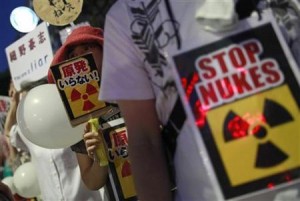 Prime Minister Yoshihiko Noda announced Japan would pull out of nuclear power by the 2030s and triple the share of renewable sources to 30 percent of its energy mix. In Paris, President Francois Hollande confirmed his campaign pledge to cut the share of nuclear power in France’s energy mix to 50 percent by 2025 from 75 percent. At the same time he urged the European Union to set tough targets for cuts in greenhouse gas emissions for 2030 and 2040. “We have an ambitious strategy,” Hollande told an environment conference, calling for a 40 percent cut in carbon dioxide (CO2) emissions by 2030 and a 60 percent reduction by 2040 at the EU level, well beyond the 20 percent target set for 2020. Greenhouse gases are emitted mainly by burning fossil fuels – nuclear power plants are not big contributors. The International Energy Agency (IEA), which represents the energy interests of the industrialized world, said it understood the Japanese and French moves but warned of their consequences. “While I understand those decisions and the background, one should understand the challenges in terms of climate change and rising energy costs,” Fatih Birol, chief economist at Paris-based IEA said. “Except for nuclear and renewables, we don’t have many options to produce energy without emissions. If those countries believe that the gap coming from the reduction in nuclear will be 100 percent filled by renewables, they are wrong. There will be gas, coal and even oil,” he added. The decisions by Japan and France send an anti-nuclear message to countries that have been undecided. “If you were looking at investing in an energy source at the moment, why would you invest in nuclear when you’ve just seen two major countries turning off their plants?” said Richard George, energy campaigner at Greenpeace. The industry saw a renaissance over the past decade when governments worldwide stepped up efforts to reduce carbon. The industry promotes itself as a reliable alternative to polluting fossil-fuel plants and less expensive than renewable power projects such as offshore wind farms. “You’ve got to go back to the fundamentals of why nuclear is important. It’s the drive towards low-carbon technology and nuclear will provide you that in large baseload amounts,” David Powell, vice president of the European region at U.S.-Japanese nuclear joint venture GE Hitachi, told Reuters. GE Hitachi is involved in major new-build projects around the world. GAS TO GAIN The Fukushima accident in March 2011, the worst such event in 25 years, revived fears of radiation contamination; billions of euros in cost overruns to build new nuclear plants in Europe have put a question mark over nuclear’s cost competitiveness. The growing anti-nuclear feeling is likely to further dent the order books of the world’s major nuclear power players, such as France’s Areva or Westinghouse, majority-owned by Japan’s Toshiba, with forecasts for new nuclear capacity already projected to fall by 12 percent by 2020. At a major nuclear energy conference in London this week, executives said the sector needed to redefine itself and regain the public’s trust. “I am scared by the decisions in Japan and France because these are short-term visions influenced by public pressure,” said Francois Perchet, technical adviser at the World Nuclear University and formerly employed at French utility EDF. “These people will be judged in 2080 for acting in their own interest instead of that of the planet.” As a result of the nuclear closures, Japan’s fossil fuel imports surged since March 2011, helping create a record trade deficit of 2.5 trillion yen ($32.10 billion) in the first half of 2012, five times greater than the deficit a year earlier. But some analysts say that Japan and France are well placed to deal with the results of their decisions. “Regulators (in Japan and France) are not being irresponsible because with gas generation there is a credible alternative,” Luis Uriza, of consultancy Bain & Company said. “Japan is already one of the world’s biggest gas importers and is experienced in the market, and France has many options, including imports from the North Sea, Russia, Africa and the Middle East or even to develop its own large shale gas reserves.” Uriza said export capacity improvements in the global gas sector made the political moves in Japan, France and Germany possible. “The gas industry made a lot of progress in terms of new export capacities in the past years, so this is good news for new producers in Australia, North America, the Middle East and East Africa,” he said. Despite the Fukushima setback, some countries are pursuing nuclear energy and plan to build new reactors. Both the U.S. and British governments plan to build several new nuclear power plants within a decade, and major emerging economies such as China and India as well as countries in the Middle East are forging plans to see nuclear as part of their future energy mix. Reuters.]]>