A statement issued by the Foreign Ministry of North Korea states its third nuclear test is a resolute step for self-defense taken by it to cope with the U.S. hostile act against it. 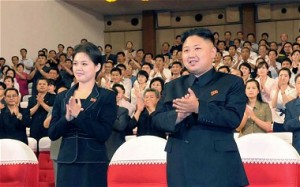 It states the main â€œobjective of the current nuclear test is to express the surging resentment of the army and people of the DPRK at the U.S. brigandish hostile act and demonstrate the will and capability of Songun Korea to defend the sovereignty of the country to the last. The DPRK’s nuclear test is a just step for self-defence not contradictory to any international law.â€

The statement reminds that North Koreaâ€™s successful launch of satellite Kwangmyongsong 3-2 in December last year was a peaceful one, conducted according to its plan for scientific and technological development for economic construction and the improvement of the standard of people’s living.

However, the U.S. prodded the UN Security Council into cooking up a new “resolution on sanctions” against the DPRK, terming its satellite launch a violation of the UNSC’s “resolution”.

Encroaching upon the right to satellite launch is an unpardonable grave hostile act as it is an infringement on the DPRK’s sovereignty.

By origin, the DPRK had neither need nor plan to conduct a nuclear test. But the DPRK’s patience reached its limit as the U.S. intensified such hostile act as implementing before anyone else the UNSC’s “resolution on sanctions”, far from apologizing for its renewed wanton violation of the DPRK’s right to satellite launch.

â€œIt is the U.S. that has conducted more nuclear tests and launched more satellites than any others. It, however, cooked up the UNSC’s “resolution” banning only the DPRK’s nuclear test and satellite launch. This is the breach of international law and the height of double standards.â€

The North Korean Foreign Ministry statement states, â€œThe U.S., though belatedly, should choose between the two options: To respect the DPRK’s right to satellite launch and open a phase of detente and stability or to keep to its wrong road leading to the explosive situation by persistently pursuing its hostile policy toward the DPRK.

In case the U.S. chooses the road of conflict finally, the world will clearly see the army and people of the DPRK defend its dignity and sovereignty to the end through a do-or-die battle between justice and injustice, greet a great revolutionary event for national reunification and win a final victory.â€