While the world is giving standing ovations to Burma dissident Aung San Suu Kyi, sectarian violence in her home country is not abating â€“ with over 70 lives taken this month.

Â­Releasing Aung San Suu Kyi from years of house arrest and allowing her to join the parliament is only a gateway to Myanmarâ€™s ambition to reshape itself into a â€œdiscipline-flourishing democracy.” President Thein Sein warns that the sectarian violence, raging in the west of the country since early June, could threaten reforms as the nation emerges from decades of military rule. 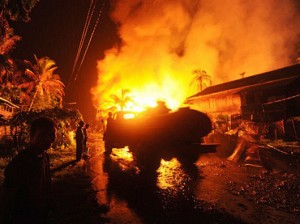 Another week of clashes took the lives of 62 people and wounded dozens more in Rakhine state, a government official said on Thursday. This adds to ten Muslims lynched on June 3 by a Buddhist mob seeking revenge for the rape and murder of a local woman.

The incident ultimately resulted in the killings of dozens of people in revenge attacks and counter-attacks. Over 30,000 of people were displaced as neighborhoods were set ablaze and knife-wielding mobs stalked the streets.

Both sides â€“ Buddhists and the Muslim minority Rohingya â€“ point fingers at each other for the cycle of attacks.

Rohingya Muslims make up some 800,000 of Myanmarâ€™s 60 million citizens. The country sees the minority as illegal immigrants from neighboring Bangladesh, and has denied them citizenship in decades of â€œsystemic discrimination,â€ as described by Amnesty International.

At the same time, Bangladesh detained another 16 Muslims on Thursday as the latter fled mob violence.

â€œWe are too scared to stay in Myanmar,â€ one of the detainees told reporters. â€œEven the army in Myanmar is harassing us.â€

Myanmarâ€™s troubled state was under emergency rule for over a week, until officials declared Wednesday that most of the area was back under control. Residents say moods are still tense.

“We need more security,” a local told Agence France-Presse. “People cannot sleep at night because they are afraid. Residents have asked for permission to guard their areas in groups at night but the authorities haven’t responded yet.”

The clashes in Rakhina follow a year of dramatic political change, including the freeing of hundreds of political prisoners and the signing of peace deals with ethnic minority rebel groups. All this had persuaded the US and Europe to suspend economic sanctions against the Asian country.

Still, Eric Draitser, a geopolitical analyst for stopimperialism.com, says the sectarian clashes in Rakhine are a sign of more than just the burden of military rule in Burma.

â€œMany of the conflicts that we see in Myanmar are a product of a proxy war that the US and Western powers are waging to prevent Chinese economic development. We can see instances in Rakhine state, also in Kachin province with a rebellion there. Each of these hot spots in Myanmar represents a key location of Chinese investment in the country,â€ Draitser told RT.

â€œSittwe (the capital of the Rakhine province) is the site of a major Chinese port, and the location from which they are building a pipeline all the way into the interior of China,â€ Draitser added. â€œAnd so it naturally makes sense that if you are trying to block the Chinese then you would want to foment a conflict inside Sittwe.â€ (RT News)