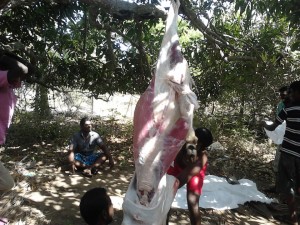 Over 750 goats were slaughtered at a religious festival in Keerimalai, Jaffna today.

According to the Jaffna based Uthayan newspaper, thousands of people took part in the Hindu ritual at the Karuhampanai Narasima Wairavar Temple in Keerimalai.

The festival began early this morning and 750 goats were slaughtered after prayers.

The Uthayan newspaper reported that over 300 cockerels were also killed as part of the ritual.