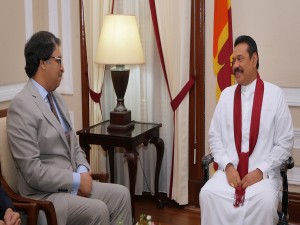 He said this during a meeting with the Secretary of the Pakistan Ministry of Foreign Affairs Jilal Abbas Jilani today.

During a courtesy call on Mahinda at the Presidential Secretariat Jilani said that there is a marked difference in Sri Lanka from when he last visited during the war in 2005.

â€œThere is a peace and tranquility one feels,â€ Jilani said, adding that the difference is not only with the end of the war but with development activities as well.

He further said that Pakistan deeply appreciates and admires the manner in which the government has been able to take care of terrorism.

Rajapaksa thanked Pakistan for its continuous support both during and after the war, stating that Pakistan played a crucial role in assisting Sri Lanka during decisive points.

The President and the Secretary also talked about the upcoming general election in Pakistan and the need to increase womenâ€™s participation in politics.