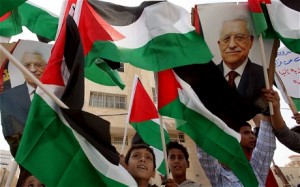 The U.N. General Assembly has overwhelmingly endorsed a Palestinian Authority bid to upgrade its status to a â€œnon-member observer state.â€ The Palestinians sought the upgrade, despite stiff opposition and possible negative repercussions from Israel and the United States. One hundred thirty-eight countries voted in favor of elevating the Palestinian Authorityâ€™s status â€“ well beyond the simple majority of the 193-member states that was required. There also were 41 abstentions and nine â€œnoâ€ votes, which included the United States, Israel and Canada. Speaking just ahead of Thursdayâ€™s vote, Palestinian Authority President Mahmoud Abbas urged the General Assembly to â€œissue a birth certificateâ€ for the state of Palestine. He is calling on member states to support that bid. â€œEvery voice supporting our endeavor today is a most valuable voice of courage, and every state that grants support today to Palestineâ€™s request for non-member observer state status is affirming its principled and moral support for freedom and the rights of peoples and international law and peace,â€ said President Abbas. But the diplomatic victory came without the support of some key countries. Europe was divided on the issue, with 14 countries supporting the initiative and 12, including Britain and Germany, abstaining. Only the Czech Republic voted against it in the European bloc. Arab and Muslim countries strongly supported the Palestinians, but it is noteworthy that no Arab foreign minister and only two Muslim ones came to personally cast their vote. One of those foreign ministers was Turkeyâ€™s Ahmet Davutoglu. He gave an impassioned speech, garnering applause throughout. â€œLet me be clear, our vision for justice, international order and human rights will not be achieved till the moment we actually see the flag of the state of Palestine standing side-by-side with ours as a full member of the United Nations, and that day will come soon!â€ said Davutoglu. The United States firmly opposed the resolution. U.S. Ambassador Susan Rice said after the vote that the Palestiniansâ€™ new status should not be misconstrued as constituting eligibility for full U.N. membership, and does not establish that Palestine is a state. â€œTodayâ€™s grand pronouncements will soon fade. And the Palestinian people will wake up tomorrow and find that little about their lives has changed, save that the prospects of a durable peace have only receded,â€ said Rice. Israel also opposed the initiative. U.N. Ambassador Ron Prosor said the Palestiniansâ€™ new status will not advance peace or change the situation on the ground, nor will it change the Jewish peopleâ€™s connection to Israel, which is thousands of years old. â€œIn fact, today you asked the world to recognize a Palestinian state, but you still refuse to recognize the Jewish state,â€ said Prosor. After the vote, Palestinian Foreign Minister Riyad al-Maliki told reporters the Palestinians feel â€˜strengthened and empoweredâ€™ by their victory, and more than determined to pursue negotiations with Israel. In the Palestinian territories, there was great celebration after the vote. But their joy could be short-lived if there are economic and political repercussions. The U.S. Congress could cut funding to the Palestinian Authority, as well as to the U.N. organizations they join. Israel also could retaliate by holding back tax money it collects and distributes to the Palestinian Authority, or by expanding Jewish settlements in Arab areas. But it also could have the effect of adding a new urgency for the parties to return to the negotiating table to restart the moribund peace process and resolve final status issues. (Voice of America)]]>