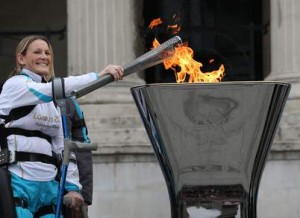 London mayor Boris Johnson has said the Paralympic Games will “dazzle the world” as a ceremonial cauldron was lit in London’s Trafalgar Square to launch the torch relay. Mr Johnson watched as Claire Lomas, who became the first person to complete a marathon in a bionic suit, lit the cauldron from the English national flame kindled on Scafell Pike earlier this week. The Prime Minister and London 2012 chair Seb Coe were also at the ceremony, which took place on the north terrace of the square outside the National Gallery. As he promised that the forthcoming Games would “dazzle the world”, the London mayor said: “The Olympics showed what we can do and I think the Paralympics will show what kind of people we are, what’s going on in our hearts.” He told Sky News that after the success of the Olympic Games there was “a lot of pressure on us to produce a wonderful Paralympics as well”. He said tickets were “selling out in the most incredible way” and “there has never been a Paralympics with demand like this in the past”.

The Paralympics are on track to be sold out when the competition starts, with about 2.3 million tickets sold so far – more than any previous Paralympic Games. Around 10% of tickets are still to be sold, but are expected to be snapped up within days. However, organisers have warned people should still expect to see some gaps in seating as spectators roam between sports and as a result of accredited seats left empty. But Lord Coe added that the UK was “raising the bar for Paralympics support” and it was a big advantage that many of those competing were “household names” in Britain. The London mayor admitted there would be a great deal of pressure on the capital’s transport network during the September Games and Londoners to “moderate” their journey patterns as had happened in the Olympics. Ms Lomas, who was left paralysed from the chest down following a horse riding accident in 2007, walked the London Marathon earlier this year in a pioneering robotic suit, raising Â£204,000 for Spinal Research. Following the cauldron lighting, Ms Lomas said: “It was amazing. I felt very proud and honoured to be asked to take part today. It was actually quite nerve-wracking. I was shaking before I went on but it went smoothly.” After she lit the cauldron, 26 flame ambassadors each collected a splinter of the flame in a lantern to take back to celebrations being held around the country. The flame visited a number of London’s most famous landmarks, including the Royal Opera House and Houses of Parliament, as the capital geared up for the start of the Games. Meanwhile, at Tower Bridge, the Paralympic symbol, the Agitos, was moved in to replace the Olympic rings hanging high above the River Thames. The three circling arcs represent Spirit in MotionÂ  the Paralympics motto and the red, blue and green color scheme which incorporate colors from flags from across the world. Speaking in Trafalgar Square, David Cameron said: “The Olympic Games made our country proud. I believe these Paralympic Games will make our country prouder still.” He added: “We are going to show the whole world that when it comes to putting on a show, there is no country like Britain and no city like London.” Three other Paralympic flames were struck by Scouts on the summits of the highest peaks of the home nations earlier this week. The flames will rest at Paralympic celebrations in Belfast, Edinburgh and Cardiff, along with London, before heading to Stoke Mandeville, where they will be united during a special ceremony on August 28 before a 24-hour relay to the opening of the Games at the Olympic Stadium. The torch relay will begin at Stoke Mandeville Hospital – known as the spiritual home of the Paralympic movement. It will then make a 92-mile journey to Stratford, arriving in time for the opening ceremony on Wednesday. (Sky News).]]>