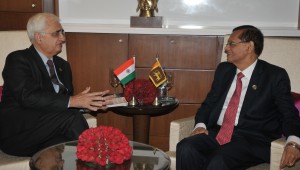 The Sri Lankan External Affairs Minister G. L. Peiris who is in New Delhi for the 12th Meeting of the Council of Ministers of the Indian Ocean Rim Association for Regional Cooperation (IOR-ARC) that is currently chaired by India, met the Minister of External Affairs of India, Salman Khurshid yesterday.

Meanwhile, strongly taking up the issue of fishermen with Sri Lanka, India yesterday pressed that country to “expeditiously” address the issue of five Indian fishermen in Lankan custody lest it becomes an “irritant” in bilateral ties.

This was conveyed by External Affairs Minister Salman Khurshid to his Sri Lankan counterpart Gamini Peiris during a 30-minute bilateral meeting on the sidelines of the ministerial meeting of Indian Ocean Rim-Association for Regional cooperation.

“The issue of Indian fishermen and the difficulties they face when they are apprehended by Sri Lankan Navy and Sri Lankan Coast Guards were raised.

“Khurshid said it was necessary to deal with them humanely and he urged Peiris on the case of five Indian fishermen who still remain in custody there.

“The Minister requested his Sri Lankan counterpart to try and address this issue expeditiously so that this is not an irritant in the relationship,” official sources said.

In this context, the two Ministers agreed that it was necessary for the fishermen associations to meet at an early date to try and reconcile divergent interests from different perspectives.

Peiris in his discussion underlined that India was an important partner of Sri Lanka and had an indispensable role as Colombo now faces major challenges as it proceeds to try and reconcile the political situation within the country.

Briefing Khurshid on the current political situation in his country, Peiris said they had about 296,000 internally displaced persons till last week and they have now rehabiliated everybody. He also mentioned that demining activities have largely been completed.

Sources said he mentioned that the economic growth in Jaffna last year and this year was 26 per cent. He mentioned this while trying to tell Khurshid that Sri Lanka was moving forward on the front of rehabilitating internally displaced.

There was a also a discussion on the LLRC report and the difficulties that the Lankan government is facing in terms of implementing aspects of that report. One of the problems mentioned by Peiris related to land issues.

The two Ministers also discussed the state of bilateral trade and investments. Sources said it was agreed that the next Joint Commission Meeting should be held as early as possible.