Mohammad Hanif is still trying to piece together the night his life changed for ever. One minute he was sitting down for dinner with his family. The next a mob wielding long knives and nail-studded clubs had burst through the door. Within minutes, two family members were dead. Within days the clan was separated, destitute and in flight.

“They were our neighbours,” said 65-year-old Hanif of the attackers who killed his son and son-in-law. “They cut them down in front of my eyes – hacked at them the way knives slice through cabbage. We ran for our lives.” 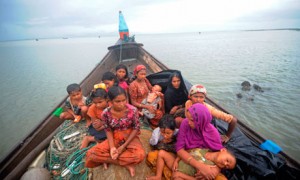 Hanif, his wife and two daughters made for the jetty where they knew a boat was tied.

“My wife and younger daughter got separated and never made it to the boat,” he said. “We waited for them. But as the mob came nearer, we had to leave. It’s been a month and I haven’t heard from them. Maybe they’re dead, maybe they’re lost.”

Such tales are familiar in the remote fishing villages of south-eastern Bangladesh, where thousands of ethnic Rohingya people, driven from their homes in neighbouring Burma, have been arriving since violence between the predominantly Buddhist Rakhine and the Rohingya – a Muslim minority with South Asian features – broke out in Arakan in early June.

Most refugees carry horrifying accounts of murder, arson and rape perpetrated by Rakhine mobs, they say, with direct support from the administration. The United Nations High Commissioner for Refugees (UNHCR) estimates 80,000 people have been displaced by the violence in Arakan.

Although both the Burmese and Bangladeshi governments say the violence has abated, fleeing refugees claim mass arrests and arson attacks aimed at driving out the Rohingyas continue.

Bangladeshi authorities have refused to accept the refugees and have pushed back boatloads of Rohingyas. Last week, Dhaka ordered three international charities helping Rohingya refugees with food and medicine – France’s Doctors without Borders (MSF) and Action Against Hunger (ACF) as well as Britain’s Muslim Aid UK – to stop operations immediately, arguing that they were creating a “pull factor” for refugees.

Although the Bangladesh government claims the influx of refugees has stopped, the boats continue to come – mostly by night to avoid being arrested by Bangladeshi coast guard or shot at by Burmese border troops.

Mohammad Hanif, his daughter Salma and five-year-old granddaughter Nafisa made it to Teknaf on Bangladesh’s southeastern tip after spending two days in an open boat. Two attempts at landing were thwarted by Bangladeshi border guards, but the third attempt, under cover of darkness, succeeded. The three now hide in a ramshackle hut belonging to a fisherman who risks arrest by sheltering them.

“I’ve met people from my village who have fled here,” said Hanif, squatting in the damp dirt-floor shack.

“The entire village was burnt down by Moghs [Rakhine] backed by Nasaka [Burmese border troops]. The government said it would protect us, but that was all talk. They want to exterminate us.”

On the run from the Bangladesh police and without any legitimate means of livelihood, Rohingyas face a bleak future on the Bangladesh side of the border. But that hasn’t prevented Shah Noor, 23, from the Akyab area of Arakan state, from making the perilous trip along the Bay of Bengal to Teknaf.

Noor, sheltering with a Bangladeshi fish trader he befriended two years ago, said he was sent to Bangladesh by his mother mid-July after police started rounding up young Rohingya men.

“I didn’t want to leave but when the police arrived, she swore on her head that she couldn’t bear to see me tortured,” he said. “So I ran away and hid in the bushes. The police told all the men to lie down and then they kicked them one by one. Many people have been arrested and turned over to Rakhine mobs.”

Such accounts are difficult to verify, since much of northern Arakan state is a no-go area for journalists and independent observers. But the refugees’ claims are consistent with reports by human rights organisations such as Amnesty International and Human Rights Watch that say security forces have targeted Muslim-inhabited areas following the riots. Rohingyas have been beaten, raped and killed by security forces and Rakhine Buddhists, according to Amnesty.

Burma declared a state of emergency on June 10, deploying troops to quell the unrest. But Human Rights Watch has accused the government of mounting a “brutal and biased police response”. Brad Adams, Asia director at Human Rights Watch, said the international community had been “blinded by a romantic narrative of sweeping change” in Burma.

Rohingyas such as Hanif and Shah Noor accuse the government of fomenting the massacre by urging Rakhines to kill the Rohingya “Kala” (blacks) – an overtly racist strategy that turned neighbours into killers.

They point out that many of the victims of the riots died of gunshot wounds, though the rioters were mainly armed with machetes and clubs. “It was the government,” Shah Noor said quietly. “Without the military backing, the Moghs would never dare attack us. The government wants to drive us out.”

On 11 July, Burmese President Thein Sein suggested that the country could solve the problem by expelling all of its Rohingyas or by having the United Nations resettle them – a proposal that a United Nations official quickly rejected.

Burma considers the Rohingya Muslims as illegal immigrants from Bangladesh. Bangladeshi officials say the geopolitical reality of the region makes that improbable.

“Why would any Bangladeshi move from his country where he is safe to where he is sure to be persecuted or killed because he has no rights there?” asked one foreign ministry official in Dhaka, speaking on condition of anonymity.

“Since independence from British rule in 1947, Bangladesh has been more prosperous and open than Burma.”

The official pointed out that Burma had signed agreements with Bangladesh to take back refugees in 1979, 1994 and 2011.

“Voter lists of several elections in Burma in the last 50 years along with the agreements signed with the Bangladesh government prove that the Rohingya are citizens of Burma,” he said.

Mohammad Hanif says Arakan is the only home he knows.

“We hope the nations of the world will help us go back. We want the bloodshed to stop.”

Brown-skinned with Bengali features, the Rohingya complain they have been persecuted for decades despite centuries-old roots in the region, owing to ethnic, religious and cultural differences with the mainstream Tibeto-Burman people.

Experts say that the key to understanding the conflict lies in the unique history of Arakan, a medieval kingdom located at the edge of south Asia which became a province of Burma only after the Burmese invasion in 1784.

While the Arakan Yoma mountain range creates a formidable barrier with the rest of Burma, Arakan is separated from the Chittagong region of Bangladesh only by the Naf river.

“People have been moving in both directions across the Naf throughout history,” said Pamela Gutman, an academic at the University of Sydney, who is the author of several books on ancient Arakan.

Although Islam came to the region with 8th century Arab traders, and the presence of Muslims in medieval Arakan is well documented, there is some evidence that Brahmanic people from Bengal may have established an ancient kingdom named Vaishali in north Arakan long before then.

The Rohingya say they have inhabited the area of western Burma for centuries, pointing to the etymological link of Rohingya-Rakhine-Arakan.

But in 1982, Burma passed a controversial law that stripped them of citizenship, in effect turning them into the “Roma of Asia”.

The United Nations says they are among the most persecuted people in the world.

About a quarter of them – 200,000 people – have crossed into Bangladesh in recent years to escape repression in Burma where the army has been accused of carrying out persecution since 1978.

Perhaps the most graphic example of regional indifference to their plight was the incident four years ago in which the Thai military was accused of intercepting boatloads of migrants in the Andaman Sea, only to leave hundreds of them to perish on the water. (The Guardian).