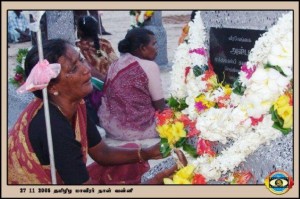 In a written message to Tamil nation and the freedom campaigners of Tamil Eelam, the Secretary General of Kurdistan Free Life Party (PJAK) Rehman Haci Ehmedi commemorates Tamil Eelam Heroesâ€™ Day, in which the first guerrilla of LTTE (Liberation Tigers of Tamil Eelam) was killed in 27 November 1982 by Sri Lankan militaries. The full message reads as follow: Happy Tamil Eelam Heroesâ€™ Day to Tamil Nation Revolutionary greetings for the heroic and steadfast nation of Tamil Dedicating campaigners and activists of Tamilâ€™s freedom path; our pains and sufferings, our hopes and aspirations are the same. Not we do only share them together, but with all the oppressed peoples in the world who are struggling to attain freedom. In the same manner; all the inhumane fascists and chauvinists in the world share their way of thinking, ideology and paradigm. History of the world has been full of clashes between the occupiers and the occupied. As a result of struggles, resistances and sacrifices more of the occupied people have been liberated and the fascist and chauvinist occupiers are being destroyed successively. In the last century more than 122 nations have been liberated and achieved their rights. Many more are leading liberation struggles and the bodies of their daughters and sons are becoming the fuelling logs of revolution blazes while their villages and cities are being destroyed; the Tamil and Kurdish nations are just samples of those peoples. History and the philosophy of those liberated nations give us a lesson as the campaigners of liberation. The lesson is that campaign for freedom means; struggle, devastation, resoluteness and resurrection; struggle again, devastation, resoluteness and resurrection; once more struggle, devastation, resoluteness and resurrection; and ultimately triumphant and freedom will prevail. Each damage and devastation would push us a step forward once we stand up, this is the dialectic of struggle for freedom and liberation. We have also experienced damages and devastations, but we never gave in and stood up again. Any nation who is sacred of damage and devastation will never triumph. Â We should learn how to stand up from the way we get damaged and are devastated, any nation who learns how to stand up, will triumph. In the hope of revitalization of the heroic nation of Tamil Eelam, in the hope of triumphant and freedom for the resolute and revolutionary nation of Tamil Eelam; never rest unless triumphing! The Secretary General of Kurdistan Free Life Party (PJAK) Rehman Haci Ehmedi 29-11-2012 ]]>