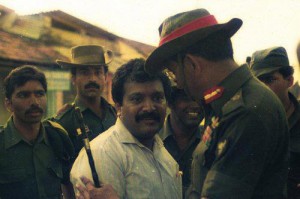 Then Sri Lankan president Ranasinghe Premadasa threatened to go to war with India in 1989 if Indian troops were not pulled back, the then Indian high commissioner in Colombo has revealed. Lakhan Lal Mehrotra has told Indian Foreign Affairs Journal that Premadasa held out the sensational threat when he called on the president at his Colombo office. The president told Mehrotra that if India did not agree to withdraw its military, he would announce on state-run television that Sri Lankan forces had taken charge of the countryâ€™s north and east. â€œAnd then if the IPKF (Indian Peace Keeping Force) resented, there would be hostility and war,â€ Mehrotra quoted him as saying. Mehrotra reportedly replied: â€œExcellency, I have come here to discuss peace with you, but if you want war you will have it.â€ He added in the journalâ€™s Oral History column: â€œThese words, delivered in a very serious manner, brought him down. I was observing him keenly; he was not expecting that kind of reply. â€œHe was virtually shaking and could not speak for a minute or two.â€ Other Sri Lankan leaders, including the late Ranjan Wijeratne, who was the foreign affairs minister, suggested to Mehrotra that he should calm down. Mehrotra said he told Wijeratne that he always stood for peace but the president seemed to only think in terms of war. â€œIn that case we should part company and face the consequences.â€ Mehrotra says that at one point earlier, Premadasa also threatened to abrogate the 1987 India-Sri Lanka Agreement under which the Indian Army was deployed in the islandâ€™s northeast to end Tamil separatism. Premadasa reportedly said that he did not care if there was a rupture in diplomatic relations between India and Sri Lanka. He also said he would declare Indian troops in his country an occupation force and it would hurt New Delhiâ€™s reputation. Mehrotra says he told the president: â€œWe will take care of our reputation.â€ The president then angrily retorted: â€œIt will cost me my political future and your next visit will be for my funeral!â€ Mehrotra says: â€œThese were the exact words he used.â€ In a tumultuous time for India-Sri Lanka ties, India deployed its troops in Sri Lankaâ€™s northeast under a 1987 bilateral pact. The agreement was signed by then president J.R. Jayewardene of Sri Lanka and then prime minister Rajiv Gandhi of India. But Premadasa, who was then Sri Lankaâ€™s prime minister, never accepted the 1987 agreement. When he became president in late 1988, he pledged to send the Indian troops home. In June 1989, after entering into talks with the Tamil Tigers, he publicly demanded that India take back its troops by July 1989, causing a diplomatic furore. After intense backroom discussions in which Mehrotra played a major role, India eventually pulled back all its troops by the end of March 1990. Mehrotra, however, says that once Premadasa realized that India would be taking back its military, he hugged Mehrotra and praised his diplomatic skills. Mehrotra also quoted the late Jayewardene as telling him that while he did not trust the Tamil Tigers, Premadasa â€œwill learn his own lessonsâ€.Â (IANS)]]>